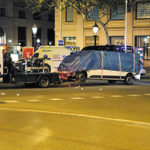 The suspected van is towed away from the area where it crashed into pedestrians at Las Ramblas in Barcelona, Spain, August 18, 2017. REUTERS/Sergio Perez

Over 200 Muslims rallied in the streets of Granada, southern Spain, in protest against terrorism and calling for peace. “It is very important for us to affirm our values as Muslims, which are the same as those of all other human beings on this planet,” said Nizar Liemlahi, director of the Dar Loughat Muslim cultural association, one of the co-organisers of the rally. The rally was called after the city’s main mosque was attacked with flares by a handful of members from a far-right group. Muslim groups have reported a jump in anti-Islamic hate incidents since the twin vehicle attacks in Barcelona and the nearby seaside resort of Cambrils recently that killed 15 people. Those attacks were claimed by the Daesh terrorist group. Only 0.1 per cent of the world’s Muslims commit attacks and these people “do not represent our values or our principles,” said Liemlahi, a psychologist who moved to Spain from Morocco in 2010. Participants in the rally carried banners with slogans such as “I am Muslim and I want to live in peace” and “We also are victims” as they gathered outside Granada city hall.