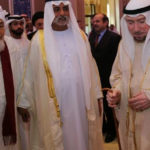 Abu Dhabi: Top global religious leaders urged countries around the world to look at the UAE as an example of a nation that seeks religious and cultural tolerance, while helping combat racism and hatred. During the fourth Forum for Promoting Peace in Muslim Societies, themed Global Peace and Islamophobia,’ held in Abu Dhabi recently, hundreds of religious leaders gathered to shed light on “The reality that our world faces today”. At the forum, which is held under the patronage of Sheikh Abdullah bin Zayed Al Nahyan, Minister of Foreign Affairs and International Cooperation, Shaykh Abd’Allah bin Bayyah, president of the Forum for Peace, said combating radicalisation and intolerance must start within each nation. He said it is crucial for education systems around the world to teach youth about co-existence. “We must work on education in schools and universities”because to make progress you have to take care of your home.”
Shaykh bin Bayyah said the top objective for religious leaders at the forum is to show the reality of Islam. “The concept of jihad and a number of other concepts have been distorted and used in ways that are untruthful,” he explained. Sheikh Nahyan bin Mubarak Al Nahyan, Minister of Tolerance, said the UAE will continue to spread its message of peace and acceptance. “The leaders of this noble country always emphasis on tolerance and mutual understanding.” Father Bishoy Salib, pastor of the Coptic Orthodox Church in Abu Dhabi, said the UAE has created a “blessed gathering,” and continues to raise awareness about unification. “The churches have been serving in the UAE for over 40 years. Our first mass began in 1974, and because of the UAE’s long history, how neutral and open-minded it is towards embracing all cultures and religions, we can say that the UAE is an example of what every country in the world should be.”
(Extracted from khaleejtimes.com)