Islamic Voice 0 May, 2014 12:00 am
Muslim Council Calls for Muslim Women in Leadership Roles
Terrorism, a Product of Extremist Ideology
A Giant Leap into Industry 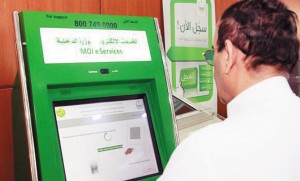 Riyadh: Saudi Arabia ranks fifth among the world’s top 10 countries in e-government services and online government-citizen interactivity, according to a comparative study conducted by Accenture International, a company specialized in administrative consultation. The Kingdom was found to excel in providing online portals for public services and using social media networks to interact with citizens. The study was conducted on a sample of 5,000 individuals from the 10 countries that topped the list. “Singapore came first, scoring 7.4 out of 10 on a scale evaluating digital services and citizen engagement,” the report said. Norway came second, scoring 7.3, followed by the UAE with 6.7 points, South Korea with 6 points, and Saudi Arabia with 5.9. “Citizens want to interact online with retailers and banks,” said Bernard Le Masson, head of Accenture. “They also want to engage digitally with their government and feel connected through mobile devices 24/7.” “We found that citizen demand for digital services is even stronger in emerging markets, such as India, Brazil, Saudi Arabia and the UAE, where 80 percent of citizens said they would like to communicate with government via social media and on their mobiles,” he said.
Brazil, Germany, India, the United Kingdom and the United States also ranked in the top 10. The majority of countries that scored high in the study have made a sustained investment in digital government, he said. “The highest-ranking countries also actively seek and listen to citizen feedback.” Criteria is measured on the basis of citizen service delivery experience, citizen satisfaction and service maturity.