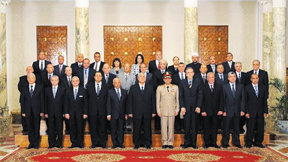 Cairo: Egypt’s interim president swore in the first Cabinet since the military ousted the Islamist president, giving members of the country’s liberal movements key positions. The Cabinet includes three women. The new government is led by Prime Minister Hazem El-Beblawi, an economist. Underlining the relatively liberal outlook of the new government, President Adly Mansour named three women in his Cabinet, taking the powerful ministries of information and health as well as the environment ministry. The Cabinet has 33 members, not including El-Beblawi. Most past governments for decades have had at the most two women in them. The Cabinet does not include any figures from Islamist parties.