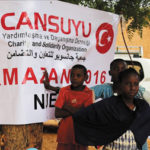 Niamey, Niger: Turkey’s Cansuyu Charity and Solidarity Organization announced that it will build wells in Niger, as the country faces serious water shortage and drought, Anadolu Agency reported “We will launch various campaigns to build water wells in Niger”, Mesut Ceylan, the association’s Africa representative, told Anadolu Agency. Many citizens of the Muslim-majority country are forced to stand in long queues to get water, especially during Ramadan. “This needs to be solved urgently. People should prioritize vocational training in order to stand on their own feet.
We will take the necessary initiatives with institutions and organizations related to this issue”, Ceylan added. Cansuyu Charity and Solidarity Organization has also distributed over 1,000 food aid packages to Nigerians during the holy month. Turkish International Cooperation Agency (TIKA) has also dug water wells in 30 villages in the West African state. Niger, one of the world’s poorest countries, was ranked 188th by the UN’s Human Development Index in a 2015 report.