Islamic Voice 0 June, 2017 12:00 am
Gaza not ‘liveable’ by 2020
French Company Launches Kit to Detect Presence of Pork in Meal
Religious, Cultural Diversity Must Be Respected By All, says MWL Chief 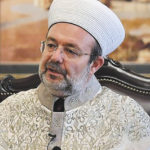 Ankara: Turkey’s top religious affairs body has formulated a two-pronged common strategy to address Islamophobia in Europe. Diyanet head Mehmet Gormez said the new strategy would gather Muslim pioneers in Europe, and arrange meetings with people from other faiths and communities. Gormez said that Diyanet would organize the first meeting on May 22-25 in Turkey’s western Sakarya province. He added that Sakarya’s meeting would gather religious officials from 120 countries, including religious advisers who work as representatives of the Diyanet.