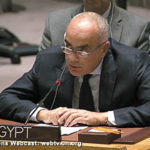 New York: The UN Security Council has unanimously adopted a resolution urging all countries to eliminate the supply of weapons to Daesh and other terrorists, including by taking legal action against suppliers and marking arms to improve their traceability. The resolution, sponsored by Egypt, strongly condemns the continuing flow of weapons, military equipment, drones and improvised explosive devices to Daesh, Al-Qaeda and their affiliates as well as other illegal armed groups and criminals. “This is one of the first resolutions aiming to prevent terrorists from acquiring weapons,” Egypt’s UN Ambassador Amr Abdel Latif Aboulatta, the current Security Council president, said after the vote.
The resolution urges the UN’s 193 member states to prevent and disrupt procurement networks for such weapons. It also urges all countries to act cooperatively to prevent terrorists from acquiring weapons, including via the Internet or social networks.
(Extracted from arabnews.com)