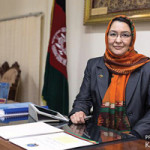 Kabul: Former Minister of Public Health of Afghanistan, Dr. Suraya Dalil presented her credentials as the Ambassador and permanent representative of Afghanistan, to Swiss Confederation President. She also thanked the government of Swiss for continued support to Afghanistan in different sectors including peace and stability, economic development and reconstruction, specifically since 2001. Dr. Dalil promised to take all necessary steps in further developing bilateral ties between the two nations.