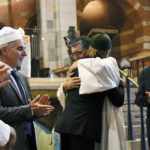 Muslims gathered for Catholic Mass on Sunday, last month, in churches and cathedrals across France in a powerful display of unity and solidarity with Christians following the killing of an elderly Catholic priest. France’s Muslim council, the CFCM, urged Muslims to show “solidarity and compassion” over the murder. Dozens of Muslims attended Mass in Rouen, a few miles from the church in Saint-Etienne-du-Rouvray where two Muslim teenagers slit the throat of 85-year-old Rev. Jacques Hamel after pledging allegiance to the ‘Islamic State’ terrorist group. “We are very moved by the presence of our Muslim friends and I believe it is a courageous act that they did by coming to us,” Dominique Lebrun, the archbishop of Rouen, said after the Mass. “I thank you in the name of all Christians,” he said. “In this way you are affirming that you reject death and violence in the name of God.” “It’s an important gesture of fraternity. They’ve told us, and we know they’re sincere, that it’s not Islam which killed Jacques Hamel”, he said.
(Stringer/Anadolu Agency/Getty Images)