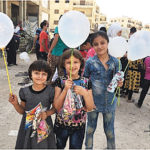 Syrian children drew pictures and wrote letters calling for peace last month, as part of an initiative from Catholic and Orthodox Christian leaders in the region. The images that have emerged from Syria’s five-year long civil war are heartbreaking.
In an effort to spread hope in the midst of this despair, several organizations joined together last month, to pray for peace in Syria”and to make sure the international community hears these children’s voices. Both Muslim and Christian kids in over 2,000 schools in the country participated by drawing pictures, writing letters or writing messages to the global community on white balloons.
Children in Aleppo, Damascus, Holms, and other Syrian cities and villages participated in the peace initiative on October 6 and 7. The Action Day for Peace was inspired by a joint declaration made by Pope Francis and the Russian Orthodox Patriarch Kirill in February this year, which called on Catholic and Orthodox Christians to work together to highlight the plight of victims of violence in Iraq and Syria.
A delegation of Catholic and Orthodox Christian religious leaders from Syria planned to deliver the children’s drawings and letters to high-ranking representatives at the European Union and the United Nations and to Pope Francis, head of the Catholic Church.
UNICEF calls Syria one of the “most dangerous places to be in for a child.” The international organization reports that more than 80 percent of Syria’s child population (that’s 8.4 million children) has been affected by the conflict, either as refugees whose families have been forced to flee their homeland, or as residents of an active war zone. The war has disrupted kids’ access to routine vaccinations, their ability to attend school, and their mental health.