Islamic Voice 0 January, 2017 12:00 am
Where Are the Muslim Scientists?
Reaching Out With Children’s Books
California’s State Assembly Takes Stand Against Islamophobia 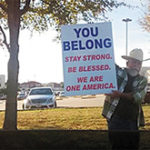 A man was photographed holding a sign on the side of a road outside the Islamic Center of Irving, near Dallas, USA, reading: “You Belong. Stay Strong. Be Blessed. We Are One America.” A passerby snapped a photo of the man and shared it on Twitter, where it quickly went viral.
A representative for the Islamic centre told The Washington Post that the man had been standing outside the mosque with his sign for days. He wanted to show support for the local Muslim community after Donald Trump was ele-cted President following a campaign dominated by anti-Muslim pledges.
The man identified himself as 53-year-old Justin Normand. He said the gesture was about “binding up the wounded.” It was, he said “about showing compassion and empathy for the hurting and fearful among us. Or, in some Christian traditions, this was about washing my brother’s feet. This was about my religion, not theirs. And, it was about what I think I must do as an American when our way of life is threatened. Targeting people for their religion not only threatens our way of life, it is the polar opposite of our way of life.”