Islamic Voice 0 August, 2016 12:00 am
Do Not Miss Your Suhoor Meal
Signs of God Scattered in the Universe
Seek the Good in Everyone 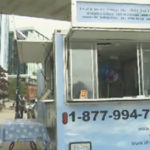 The Mobile Muslims Exhibition, a 40 day journey, is a coast-to-coast campaign that is looking to debunk some of the common misconceptions about the religion and culture through community education, Canadian CTV News reported. “We want people to know the good side, the true side of this religion. Islam is a very peaceful and loving religion,” says Farhad Ghaffar, with Mobile Muslims. Six Muslims, all from different countries and backgrounds, are partaking in the exhibition on wheels. The goal of the trip is to educate people about the true meaning of Islam. “The slogan we want to be recognized by, love for all, hatred for none, this is what Islam teaches,” says Ghaffar.
They say in many ways their religion has been hijacked by terrorists, committing inhumane acts who proclaim to follow Islam.
James Sinclair, a Nova Scotian, says that misconception has created the idea that Islam is associated with terrorism. “There are more than 1.6 billion Muslims in the world and it’s less than 0.001 that are extremists,” says Sinclair. “So the ones that are peaceful and loving Muslims, who practice their faith without harming anybody, or doing anything extremist, they are struggling with the fact that they have to basically accept responsibility for this, because a lot of people assume that all Muslims are branded with this terrorist label.”
Jamal Badawi isn’t part of the travelling group, but has dedicated his life to educating others about Islam, teaching and writing about religion. “The problem is that some people compare the worst of others with the best of theirs,” says Badawi. “Islam is the pure teaching of the Qur’an.” ” The success would be to be embraced by all of Canada and for Canada to understand that Islam is completely removed from terrorism,” says Sinclair.