Islamic Voice 0 August, 2018 12:00 am
A Life of Service: Role of Proper Parenting
How to Treat the Prophet’s (Pbuh) Advice
Ramadan: A Month Long Spiritual Gym

A child asks his mother: “Mummy, how come the nameplate at the entrance of our house mentions only Papa’s name? 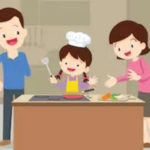 If you are a parent and you want your child to be happy and to grow up to be an emotionally-healthy adult, you need to do everything you can to make your child feel truly at home”in your home and his/hers. Your child should feel that his home is a place where he is safe and secure and where he is valued, wanted and respected by those who share the same space.
Unfortunately, some parents, in ignorance or selfishness, do just the opposite”sometimes unthinkingly, but in some cases, deliberately and maliciously. They make the child feel that the home isn’t really his or even that he is a burden”sometimes just through seemingly innocuous remarks. In extreme cases, parental mistreatment can cause children to feel trapped in a place which they long to escape.
Consider the following hypothetical cases of such insensitive behaviour, ranging from apparently harmless to clearly very cruel, on the part of parents that can make children feel unwanted at home:
A child asks his mother: “Mummy, how come the nameplate at the entrance of our house mentions only Papa’s name? We also live here, so how come our names aren’t there?” The mother answers: “It’s Papa’s house, dear. When you grow up and have your own house, you can put your name on your nameplate.”
A mother has an argument with her grown-up daughter who, she thinks, has long past the right age for marriage. In the heat of the moment she tells her: “I don’t know why your father and I are saddled with a burden like you. I wish you’d get married soon and leave!”
A son doesn’t agree with his father about something and the angry father retorts: “This is my house. As long as you are here, you do as I say and obey the rules of this house. When you leave and set up your own house you can do what you like.”
A father who’s upset that his son isn’t earning money and is still economically dependent on him says: “When I was your age, I had already left my father’s house and was economically independent.”
A man buys a cupboard without consulting his daughter who lives with him. The daughter thinks it is ugly”she would never have bought it. But she keeps quiet because she knows her father will snap at her if she speaks her mind. The man has the cupboard installed in his daughter’s bedroom”without asking her. Even then she doesn’t say a thing. She doesn’t want to be shouted at.
A man decides to run an office from his home. There are all sorts of people coming into the house throughout the day to meet him”customers, suppliers and so on”and they make a lot of noise. The man’s son is very upset about this. Could he please consider taking a separate office for his business, he asks his father. “Why make our home a public space?” he asks. “A home is meant to be just that”a home”and not a business centre,” he tells him.
But instead of listening to his son and understanding his feelings, the irate father snaps: “It’s my house. I’ll do what I like. Don’t tell me what to do. I don’t interfere in your life; why should you interfere in mine?”
*
These cases are all hypothetical, but you may know parents who  do behave sometimes in this manner. Children who are subjected to such behaviour on the part of parents often turn out with many emotional problems.
They are likely to have very fragile or even hostile relations with their parents because they are made to feel that their parents don’t love them and don’t value their feelings and views. They may even choose to cut off from their parents if they leave their parental home.
It is possible that they will feel like a burden and consider themselves unwanted wherever they go.
It is possible that they will be unable to have strong, stable and healthy relationships with anyone (including their friends and spouse), since their first relationship”with their parents”was a strained one.
It is possible that they will have low self-esteem and lack confidence because as children they were made to feel unwanted, unloved and worthless by their parents.
Because their parents didn’t allow them any role in making decisions in the home and sought to impose unquestioning obedience to parental authority on them, it is possible that even as adults they will find it difficult to take decisions themselves and will constantly depend on others to decide and do things for them.
As adults, such people may be totally insensitive to the needs and feelings of other people, behaving just as their parents did with them when they were children.  They may come to regard this as ‘normal’ and expected behaviour, since as children this is how their parents treated them.
*
Sometimes, even some well-meaning parents who do love their children hurt their children in some of  the above-mentioned ways, unwittingly making them feel unwanted and a burden. Home is where the heart is, they say. I’m not a parent, but if I were one I think I would reflect every now and then if I was doing everything I could to make my child feel that his/her heart was truly at home where it should be”in our home: equally his/her home and mine.