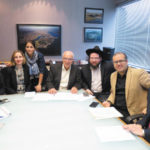 Nuns’ Island, Montreal: Christians, Muslims and Jews in Nun’s Island in Montreal, QuÃ©bec, Canada, have come together recently under the same roof, hoping to spread the message of peace and unity. A Jewish Chabad centre, the Al-Jazira Islamic Centre and the Catholic Ste. Marguerite Bourgeoys Church have all moved into the same building, a project that began after the church approached land developer Samuel Gewurz, about building a bell tower, CTV News Montreal, reported. “That was a novel request for me,” he said. “I thought about it for a moment and I told him, if we could consider the bells on the tower as bells of unity, then I’m in.”
Gewurz and church administrator Roger Legare approached the other clergy and expressed their very specific vision. “It’s not a religion idea,” said Legare. “In all our religions, charity and involving ourselves in the community over our feelings is what is needed at the moment.” The others quickly agreed.
The first project was establishing a collection centre for Syrian refugees. A mission that began in Bendjennet’s garage was able to move to donated space in the building as the other places of worship came onboard. “Absolutely no religion, no politics,” said Al-Jazira administrator Mourad Bendjennet. “It’s absolutely social and humanitarian work.” “Above and beyond anything else, we’re human beings,” added Rabbi Levi Itkin. “The three faiths share a lot of common values.” “I’ve never seen such energy and efficiency,” said Bendjennet. “All working together for the same goal.” The feedback has been very supportive from worshippers in all three religions. “Very positive reaction, actually, because we hear so many bad things, because of lack of communication, sometimes we don’t understand one another,” said Legare.
Opening those lines of communication is something they all hope can lead to a better world. “You know, with what happens in the world now, it’s better to send a message of peace,” said Bendjennet.