Islamic Voice 0 January, 2018 12:00 am
A Little Trick To Be At Peace!
Spiritual Light of Ramadan
Bounty of Water

Any waste of electricity, no matter for how short a while, is a waste of a precious gift given to us by God. 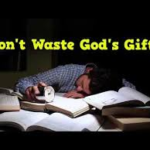 There many good things that Reha had learnt from Nani, her grandmother. One of these was saving electricity. Nani had made a rule, which she wanted everyone at home to follow: If you were going out of the room for more than a minute, you had to turn off all the lights and fans. “Electricity costs money, and money doesn’t grow on trees!” Nani would say each time she saw that someone had violated the rule. “Every bit of electricity you use contributes to global warming and environmental pollution,” she would add. “But what’s most important to remember,” Nani would continue, “is that any waste of electricity, no matter for how short a while, is a waste of a precious gift given to us by God. If you love and respect God, you should love and respect His gifts too, and use them sparingly.”
Living with a wise grandmother like that, Reha grew up to be very particular about not wasting things, including electricity. Switching off all electrical appliances in her room before going out came naturally to her. That’s a very good habit, isn’t it?

Turning Off Electrical Appliances When Not Needed
If we know that something is good, we like to tell others about it, so that they could follow it, too. Reha liked telling others about how important it is to conserve electricity. She would share with them the lessons she had learnt from Nani in this regard. “Turning off electrical appliances when you leave a room means saving money and reducing your contribution to global warming and environmental damage,” she would explain. “And, above all, it is a mark of your love and respect for God and for the gift of electricity He has given us.”
The other day, while at office, Reha discovered that her colleague Jir had left all the lights and fans in her room on and had gone out for lunch. Jir had a nasty habit of doing that. Reha had restrained herself from correcting Jir earlier, but that day, she felt she just had to tell her.
When Jir returned from lunch, Reha went to her and said, “Jir, would you mind if I said something?”

“You left your lights and fans on when you went out,” Reha said as politely as she could. “The electricity was being wasted and”¦.”

“And what?” Jir snapped. “I have the right to do as I want, to waste electricity if I feel like! Who are you to interfere in what I do?”

You can imagine how shocked Reha was at Jir’s bitter reaction. She certainly didn’t expect her to behave like that!

“Oh dear, I only wanted to say that”¦” Reha stammered.

“What I do with my fans and lights is none of your business. Please leave my room!” Jir shot back.
Reha returned to her room with a heavy heart. She had tried to do a good deed and was dismayed at what had happened.

Gain Valuable Lessons
Now, there was another good habit that Reha had learnt from Nani. And that was, to reflect, at the end of the day, on some of her experiences during day, both happy and sad, and try and discover what lessons she could learn from them. “Everything that you experience each day is like a school for you,” Nani would tell her. “If you carefully think about every experience of yours, you can gain valuable lessons from it, for how to lead your life.”
That evening, before going to bed, Reha reflected on her encounter with Jir earlier in the day. She took time off to think about what lessons she could learn from it. She then made the following list of these lessons in what she called her ‘Daily Experiences Lesson Notebook’:
a. You must not give up on reducing wastage of electricity”even if some other people don’t like what you are doing, God does! Don’t let those people’s reactions get you down.

b. If you see someone wasting electricity, you could tell him or her gently about it, but only if you think the person will care to listen to you and cheerfully accept what you say. If you feel they will not, or that they may react rudely, like Jir did, then keep quiet and pray to God about it.

c. Some people may respond positively to your suggestion to turn off lights and fans when leaving a room. They won’t think you are interfering in their lives. In fact, they’ll be grateful to you for pointing out their mistake so that in future they won’t repeat it. But some people just won’t like you telling them if they do something wrong, even if you speak to them kindly. Such people are generally full of themselves and don’t wish to improve. Leave them alone. Don’t try to change them.

d. You can’t get everyone to think like you and to be particular about respecting and not wasting God’s gifts to us, including electricity. Don’t worry about what others do or don’t do. You carry on doing what you know to be right. As the saying goes, “Be the change that you want to see in the world.”

*
And can you guess what happened the next day, when Reha got to her office? She found a note lying on her desk. It was from Jir. It read:

Dear Reha, I am really very sorry I was rude to you. I request you to please forgive me. I later realised how right you were about switching off the lights and fans. You helped me recognise my mistake. God willing, I won’t waste electricity like that again. A big thank you to you for helping me learn and improve!
A true friend indicates to you your mistakes so that you can avoid them and become a better person. You did that, and so you are really a true friend!
Thanks, once again, and keep up your wonderful work for preserving the environment.
May God bless you abundantly for your love and care! Love,

*
Now, wasn’t it just wonderful how what seemed to be a very difficult situation turned out to be a great learning experience for the two friends!