On the ninth day of the Prophet’s (Pbuh) Hajj, the pilgrims proceeded to the Plain of Arafat to stand on the Mount of Mercy. There they stood and prayed to Allah for His mercy. 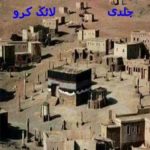 Hajj is one of the five tenets of Islam and every Muslim having the means, and healthy enough to travel, must go on this pilgrimage once in her or his lifetime. In the tenth year of the Hijrah or 632 A D, Prophet Muhammad set out for Makkah to perform his Hajj. Nearly 1,00,000 believers accompanied him. This pilgrimage is known as the Farewell Pilgrimage. Here he explained the rules of Hajj and gave his famous speech known as the Final Sermon. Upon reaching Makkah, the Prophet and his followers put on the white seamless cloth called the ihram. Then the pilgrims went directly to the Kabah and walked around it seven times in a counter-clockwise direction to show how man’s life must revolve around God. This is called the tawaf.
As the pilgrims arrived, they called out: Labbaik Allahumma Labbaik, Labbaik La Sharika Labbaik. This is the prayer called the talbiya which is the answer to the divine call to come and give one’s life wholly to Allah. Next, they ran back and forth seven times between the small hills of Safa and Marwah in memory of the time when Allah tested Prophet Ibrahim and his family. This is called the Sayi. On the eighth day of the Hajj, the pilgrims went to the Valley of Mina about 10 km from the Kabah where Allah had tested Ibrahim by ordering him to sacrifice his son Ismail. At the last moment, Allah stopped Ibrahim and sent a ram to be sacrificed instead.
On the ninth day of the Prophet’s Hajj, the pilgrims proceeded to the Plain of Arafat to stand on the Mount of Mercy. There they stood and prayed to Allah for His mercy. This is called the wuquf. Here, during the sermon on that day, this passage of the Quran was revealed to the Prophet: “ Today I have perfected your religion and I have completed My blessing upon you and I have approved Islam for your religion.” After praying, the Prophet told the Muslims to let the Quran and his own example to be their guides in life. Revenge, a very old tradition in Arabia and usury were to be ended. And he said: ‘Know that every Muslim is a Muslim’s brother’. After the sermon, the Prophet looked up and cried, “ My Lord, Have I delivered the message I was charged with and fulfilled my calling. Then he told the gathering, “you will be asked about me, so what will you say?”
They answered with one voice: “We bear witness that you have conveyed Allah’s message and have performed your duty and that you have meant goodness for us.” Pointing his index finger towards heaven and then to the people, he said, “ Oh Allah, be witness, Oh Allah be witness” The Prophet ended his speech by saying, “ Let those present convey the message to the absent.” By sunset, they headed back towards Mina gathering pebbles along the way. On the next day, they performed the ritual of casting their pebbles at Satan, symbolised by three pillars set up in memory of how Ibrahim and his family resisted the temptation of Satan. Finally an animal was sacrificed and the pilgrims returned to perform the farewell tawaf of the Kabah. The meat from the sacrifice was sent to the poor and the needy.

December 18, 2019
When the people asked the Prophet about the cure and the method to clean the qalb, he said, “Frequent remembrance ... More

July 14, 2019
Jabir ibn Abdullah reports that the Prophet (peace be upon him) said: ‘Secure your doors, tie up your waterskins, ... More

Cultivating the Habit of Forgiveness