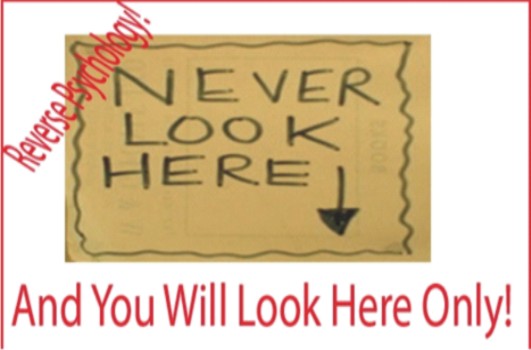 What is Reverse Psychology? Concept, Tricks, and on Whom it Works?

Arshad Sayyed 0 August, 2022 11:25 am
Homosexuality
Lessons from the disease like Corona
Warts Or Verrucas

For Example Someone Says exactly the opposite of what they actually want from you. Such as, someone says “I don’t need Your Help”, in fact, they are hoping to get help from you, and this way you can encourage someone to do what you want without pressurizing them.

1. Marketing and Sales:
Marketers often use Reverse Psychology to encourage people to buy something, for example, a salesperson tries to make up the mind of the consumer by saying “this is the one-time deal or on-time opportunity to grab this item at this much less cost”. Also, creating artificial less availability of any product to put a thought in the mind of consumers that the product must be sold out in large numbers earlier, hence it is not available to purchase, and that way salesperson will get succeeded in creating hype of the product.

2. Parents of Their Children:
Parents most of the time fail to convince their children. In such cases, they reverse use psychology many times. For Example, Parents tell their children that if you don’t want to eat this Tasty Food (Which is Actually, a healthy one like vegetables) then your brother/sister will finish it and nothing will leave for you. This act will give them the hope that no child will eat that food.

These Kind of Reverse Psychology tactics is commonly used amongst the people in the real world to get their desired outcome without even saying it. The main idea of doing so is when you tell someone they can’t do something, or you have doubts about their abilities, you are actually motivating them to prove you wrong and grow yourself.

Commonly, these techniques will work with people who are irritated, stubborn, or emotional. Usually wise, thoughtful, and grounded people are less susceptible to fall for these tricks used in Reverse Psychology.

1. Pretending you are not interested even if you are.
2. If it is less in quantity, people want it more.
3. Give and Take Method, i.e. Putting something extra than normal to gain some extra benefit.
4. Being Rightfully wrong is to make someone push their limits and do something you desired.
5. Making people commit to performing some task so they can stay consistent with their that task as commitment is the basic nature of human beings.
6. Social Awareness i.e. When multiple people try to perform something similar, we subconsciously follow them thinking that it might be beneficial that is why so many people are doing it.
7. Giving Challenges as people love to face challenges to grow themselves.

Limitations and Dangers of Reverse Psychology:
Reverse Psychology has some advantages like you are making the child eat vegetables, which is good for their health, and pretending they are the ones making that choice, or encouraging someone in their growth and socially acceptable behaviour without even letting them know or feeling bad about it.

But, on the other hand, these tactics can often leave people manipulated as a result of some serious downsides.

For Example:
• If a person understood that you are using this technique to manipulate him for your own benefit, then they will start losing trust in you.
• If Someone is manipulating a person with low self-esteem, then these people will choose your words above their own judgment and hence you may find your trick is backfiring on you.

But the main question is, although it is possible to manipulate someone by using reverse psychology for your desired outcome, still “why do I want to use Reverse Psychology?”

Because, when they find out what you’re doing, it will seriously damage your relationship and image amongst the people you trust.

Tips:
• Only use these tactics for good cause/outcomes.
• Don’t use it to manipulate people wrongly.
• Know when to use these tactics the best.
• Always remind other people that they have a choice and don’t rely on one choice only
• Don’t argue too much if someone already made up their mind
• Always Consider More Honest Options.

At the end of the day, “Honesty is the Best Policy”. It is always better to have relations built on honesty and truth rather than tactics and Manipulation.