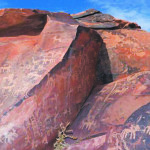 Riyadh: In a concerted effort to promote heritage tourism in the Kingdom, the Saudi Commission for Tourism and National Heritage (SCTNH), in cooperation with the Hail governorate, will set up a heritage village in Jiba. The city is incredibly rich in rock art and was included in the UNESCO World Heritage list recently.
“Jiba municipality will implement a number of projects to serve visitors and a heritage village would be established in Jiba, which will have a positive impact on the city and its visitors,” an SCTNH spokesman has stated.
Besides the expropriation efforts to finalize tourism projects, the Jiba municipality will continue its cooperation efforts with SCTNH to promote heritage tourism in the province. Moreover, the department of tourism and antiquities at the Hail University will work in collaboration with SCTNH to conduct required scientific studies and documentation of the rock sites, besides intensifying scientific publication on them.
The inclusion of Hail rock art in the UNESCO heritage list will make Hail province a center of attraction for tourists which will substantially benefit the people of Hail province.
Notably, the Hail province is incredibly rich in rock art, with major and minor sites sprinkled over much of its territory and includes two major components situated in a desert landscape, Jabel Umm Sinman in Jiba, which is located about 60 to 80 kilometers inside Hail Nofoud and the area is full of rock inscriptions and drawings.
The Jabal Al-Manjor and Raat Al-Shwimis site is located in the south-west of Hail province, about 270 km from the city of Hail. The rock drawings include animal and human figures dating back to different historical periods.
Domestic tourism is projected to witness an unprecedented growth, and the SCTNH wants to increase tourist numbers as more visitors means more employment and a better economy.
(Arabnews)