Islamic Voice 0 August, 2015 12:00 am
Beautiful Samarkand
A Third or More of All Species Could Be Gone By 2070
Gulbarga Monuments – Fort is now a Trash Bin of Rubble 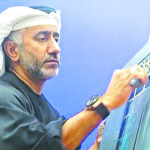 Ulrike Evelyn, a 42-year-old German woman, who made the glamorous city of Dubai her home for more than seven years, has started a whole new ambitious campaign, which could break a world record.
Evelyn, the owner of four dogs – Mailo, Fibi, Sheela and Charly – is focusing her energy on making “a lot of public noise” in a bid to launch the world’s biggest animal-rights billboard to raise awareness of animal suffering in the UAE.
“I thought about a campaign for a long time and what could really be done to improve the situation for animals in the UAE,” she told Al Arabiya News. “A lot of people are not even aware about it and they do not see it as a community issue.”
The animal-rights advocate cited the predicament of Francis, a small puppy who suffered immeasurable abuse and was left two weeks in the scorching sun without any attention.
Luckily Francis found a home, with people able to care for a paraplegic dog. But his plight pushed her to further pursue her ambitious project.
Nations like Britain have organizations like the well-established Royal Society for the Prevention of Cruelty to Animals (RSPCA) which takes cases of animal abuse to the courts where offenders face prosecution, fines and in extreme cases even jail.
But Evelyn said the UAE, which as a “very young country,” has no such service offering people an animal hotline,
“So even if people would like to offer assistance, or call for help, there is no nationwide number assigned to this cause yet,” she added.
But she said “any country needs time to build up systems, and I think this issue is increasing as more people move to the UAE.”
The resident emphasized that “there is nothing to be critiqued if it comes to this country, the UAE is an amazing place with great leaders and I am sure that it is just a matter of time,” adding that even her home country of Germany does not have all the necessary arrangements for animal welfare and animals rights. But Evelyn is gradually getting the support of big names to her realize her dream.
She already has one of the most popular Emirati artists on board in the shape of Mohammed Al-Astad.
She also has the backing of a creative agency called andStorm, which according to Evelyn is “glad to contribute to the marketing and creative works to our cause.”
“Mohamed was immediately on board as he feels that this is a humanity issue and he likes animals,” she said.
“I am very positive and of course will try to approach more people to help raise awareness for all of us, as we are living together in one country and its communities and with nature and all the animals that surround us,” she said.
(Al Arabiya News)