Islamic Voice 0 January, 2018 12:00 am
Lunch on an Arecanut Leaf Plate!
Finding Your Soul by the Sea!
What this Australian rabbi learned from a Muslim peace forum 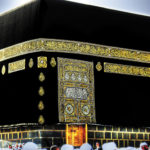 A theory is in circulation for several months, nay years, that Kaaba is the centre of the earth and nothing can overfly it. Now it has become viral over Whatsapp too. Some people known to be televangelists have tried to give such kinds of myths credibility in their speeches and booklets.
There is nothing in the Quran that describes Kaaba in these terms. The Quran e Kareem merely describes it as Qiblah for Muslims to turn to during Salat. The Masjid e Haram around it has been held as a Sacred Precincts whose sanctity should not be violated by anyone.

Figment of Imagination
To lend it some scientific attributes like it being centre of gravity and having magnetic pull is purely a figment of imagination of certain apologists who try to exaggerate things and lend the holy places scientific values that they simply do not possess. Islam does not need miracles to prove its truthfulness.
The viral content says: “Kaaba is the centre of the earth. It lies in the middle of the earth without any deviation or deformation. And because it is the centre of gravity, it naturally attracts the magnetic charges in this place. This is the first point to welcome the sunrise.”

Upturning Global Standards
Some Muslims go even beyond this and suggest that Makkah be fixed as the zero degree longitude and a new International Date Line be drawn and a new ‘Makkah Time’ be initiated. This is an invitation to upturn all the chronological standards being followed across the world which have been there for centuries.

Let us take a deeper look into these theories:
It is now universally agreed that the Earth is spherical just like any ball, rather like an orange which is a bit depressed on two ends which are called poles. If something is spherical, its centre should be inside, deep into its core, not on the surface. One can always put a dot on a ball and claim that it is the centre of the ball. No one can really contradict. The case of Makkah being the centre of the earth is just a case like this. Other individuals can similarly claim that Rome, or Ayodhya or Jerusalem are centres of the Earth and no one will be able to contest them, because a radius from all these cities directly goes to the core of the earth.

Not Even on Equator
There could have been some credibility for the theory, if Makkah would have been located on Equator which is an imaginary line dividing the Earth in northern and southern halves. But Makkah is located at least 2000 miles above the Equator.
The case of the Earth is different from a circle which is flat. A circle could have a centre which is in the middle of its diameter and equidistant from the periphery. But it is useful to be reminded that Earth is a spherical planet, not a flat and circular body or object in the space. So there cannot be a centre of the Earth on its centre. If indeed there could be one, it can be only in the core of the Earth which is currently inaccessible. And who knows if it would be ever accessible!

Vacuous Pleas
It is also wrong to assume that nothing can overfly Kaaba or Makkah and if anything attempts to fly, will be pulled to the ground or destroyed. Islam’s holy scriptures never attribute such characteristics to Makkah. Fact is that, since, Kaaba and Makkah are holy to Muslims, the Saudi Government does not allow it to come under any flight path. White House, Rashtrapathi Bhavan or Kremlin similarly come under security zones and nothing can overfly them. There is no natural barrier to overfly Makkah or these centres of power. Let us not mix science and sacredness and try to prove that centre of Islamic devotion is scientifically protected by some cosmic rays and layers of vacuum. All such pleas are vacuous, floated by weird minds who cannot really produce anything of worth. Their minds generate such fictions and the social media comes handy for them.

Gravity Works Everywhere
To say that Kaabah or Makkah is centre of gravity and has magnetic pull is equally wrong. Magnets do not exercise their pull on non-ferrous metals. So there is no question of birds, planes or drones being pulled by it. The aircrafts are anyway built of aluminum which does not respond to magnetic force. As for centre of gravity, let us know that gravitational pull is exercised by the Earth almost in equal measure across all its surface, not merely Kaabah or Makkah. One falls on the Earth whether he jumps from Eiffel Tower or Clock Tower over Harem in Makkah. There is no question of him going anywhere else. In that context Makkah has no special position.
Instead of floating such vacuous theories and fallacies, we the Muslims need to engage ourselves in study of Nature and Science deeply and seriously. No purpose would be served by creating such theories around religion and religious places. If we really study Science and Nature, perhaps we may be able to come up with some discoveries, inventions and theories that would be stranger than fiction. If we keep on attempting to create these stupid ideas”a la some Naik or Rushd Khalifa”we will end up nowhere except in exile from the world.

Sowing Confusion
I remember some televangelist from India having pleaded creation of a zero longitude that passes through Makkah so that a new Makkah Time could be devised. This presupposes creating a new International Dateline. The current International Dateline passes east of the coast of Japan in the Pacific Ocean. The British who then ruled major part of the Earth fixed Greenwich at zero degree longitude and the international time came to fix standard time around Greenwich Meantime. Let us be reminded that the British were all powerful at that time. And the International Date Line that they drew mainly passed through ocean. It did not disturb inhabited places, lest some of the people falling this or that side of the line and having watches that differed by 24 hours despite being in close proximity with each other. Some small island did come in between and they were placed either east or west of it according to convenience of the people inhabiting them. Any attempt to draw a new International Dateline will create a mess and confuse the entire Muslim ummah even more. They will have to deal with the international time as well as the Makkah time and there will be more confusion when watches are advanced for summers and adjusted backwards for winter time.
Many such myths have been floated by Islamic apologists in the recent past. They all need to be debunked in order that Muslims take a rational line in day to day affairs and straighten the affairs of the land under them to some principles rather than looking for baseless, weird theories. Let us believe that rationality will empower us to produce things that will be stranger than fiction.
The writer can be reached at [email protected]