Islamic Voice 0 January, 2017 12:00 am
Debunking Myths – ‘Centre of the Earth’
Tackling Atheism
Why I’m Dedicating My Life to Teaching Arabic

India is blessed with a free press, democratic traditions and a tolerant majority community. These have lent the journal a helping hand in remaining committed to the objective of providing fresh insight. 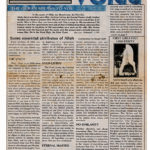 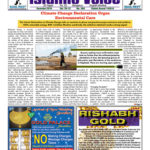 The issue of Islamic Voice in your hand signals the completion of the thirty years of the journal’s existence. It is only Allah Subhanahu wa Taala’s limitless grace and blessing that has enabled it to traverse the journey this far. Given the status quoist mindset of the audience it was intended to address, running a journal of this kind is no mean feat.
Nothing stops us from admitting that Islamic Voice is not an impressive journal. It was more so when launched in January 1987. But those were different times. We were struggling in uncharted waters. Computers were just making forays into the office rooms. Pre-press processes were cumbersome. Even the printing technology was archaic. But we were sure of our audience’s requirement, i.e., the younger generation of Muslims who had their school education in mediums other than Urdu and had no opportunity as well as incentive to learn Urdu, were growing unaware of Islam and Muslim situation. It therefore became a purveyor of the religious teachings.
But then, by the turn of the century, the Internet had burst forth upon the human consciousness. Knowledge was becoming easily accessible, and for almost no cost. Anything being written anywhere was accessible. Stock subjects need not be reproduced. The situation was demanding a new perspective, i.e., to reinterpret the Islamic teachings in the light of new issues, events and in response to the new challenges. This required not merely digressing from the original objective of informing the youth of the existing corpus of knowledge, but also supplying fresh insight to them on issues taxing their ingenuity. This required utmost care, caution, perspicacity and higher level of understanding and articulation.

Formidable Hurdles
All through the initial years of the new century we have been introducing new features. Given the severely limited nature of our resources, mental as well as material, our path forward was always pitted with formidable hurdles. The main challenge however was to be on the constant watch on changing moods. Journalism’s foremost challenge is as to how to embrace the newer readers without deserting, discarding and hurting the older ones. How successful we have been in this venture is for our readers to judge.
Despite the tag of ‘Islamic’, Islamic Voice has never towed the beaten path. Yes, it still provides the stock information on Islam, Islamic world and Muslim communities, but tries to modernize the mindset too. Be it the despicable practice of three Talaq and dominant section’s unfortunate insistence on showing their backs to the initiatives for reforms, refusal to amend the theological syllabi in madrassas, removing gender disparity, realizing the need to accept the supremacy of the nation’s Constitution over all other sources of law, the journal has subtly followed the line of embracing changes that do not compromise on ethical mores and morality.
All these have required us to cast our net wide to dig out information and methodology of interpretation from a wide variety of sources, often with rigour unexpected of the run-of-the mill journalism. The journal has maintained a steady focus on persuading the community to align their development with the contemporary trends in education, employment, entrepreneurship, women’s empowerment, induction of science and technology in all sectors of life. Knowing full well, the community’s inhibitions in embracing the new and casting away the glamour of the old, the journal has impressed the imperative nature of the changes through models and practices elsewhere.

Providing Fresh Insight
We are fully conscious of the limited human resources in the field we have chosen to trudge. Orthodoxy and conservatism still rule the roost in the Islamic world. Muslim minorities in liberal democracies are placed better than the majorities in the traditional heartland of Islam when it comes to accepting changes. India is blessed with a free press, democratic traditions and a tolerant majority community. These have lent the journal a helping hand in remaining committed to the objective of providing fresh insight. We hope the years ahead would see us doing things better than we have been doing all these years.
(Maqbool Ahmed Siraj is Executive Editor, Islamic Voice and can be reached at maqsiraj @gmail.com)