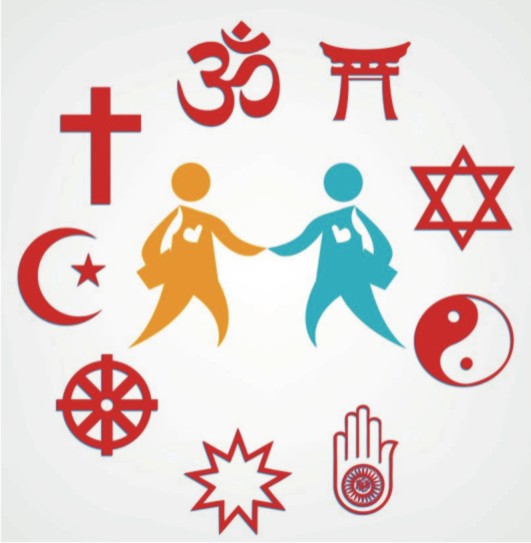 Interfaith Dialogue organizations
Innumerable interfaith dialogues have been held at local, national, and international levels in many places since then. Significant among the international interfaith dialogue forums in the 21st century are the “United Religions Initiative”, “Children of Abraham Institute”, “Interfaith Encounter Association”, “Messiah Foundation International”, “World Council of Religious Leaders”, “Co-exist Foundation” and “King Abdullah bin Abdul Aziz International Centre for Interreligious and Intercultural Dialogue”. In India, we have the “Bangalore Initiative for Religious Dialogue” (BIRD), “Interfaith Foundation of India,” and “Indian Pluralism Foundation,” to name a few. The Jamaat-e-Islami has hosted many interfaith seminars and Conferences. Despite all these sincere efforts by activists, religious intolerance persists and is also increasing. The inter-religious conferences have been too basic, formal, and surface-level. Despite glossing over theological differences, their message could not reach the masses, but remained an elitist and intellectual exercise. The rise in fanaticism and the categorization of “they” and “us” has become a common phenomenon; as a result, everything is viewed with bias and prejudice.

Hindu-Muslim relations in India
US-based Pew Research Center claims to be a non-partisan, non-advocacy Fact Tank that informs the public about the issues, attitudes, and trends shaping the world. In 2019-2020, Pew Research Center conducted a survey of religion across India based on 30,000 face-to-face interviews of adults held in 17 languages. Without going into the percentages, I will just mention the key findings:-
1) All the religious communities are united in the view that respecting other religions is a very important aspect.
2) India’s religious communities generally see themselves as very different from each other and do not approve of interreligious marriages.
3) Indians generally stick to their own religious groups when it comes to their friends.
4) While a good majority of Indians are open to having people from other religious groups in their neighbourhoods, some have reservations on this issue. This is a paradoxical sentiment of “living together but living separately.”
5) India’s concept of religious tolerance does not necessarily involve the mixing of religious communities; there are clear lines between groups.
Without vouchsafing the outcome of this survey in its entirety, it can be said that many of the conclusions reflect the realities of Indian society. Of late, when the dividing lines between the communities are becoming thicker, the Muslim minority is gradually retreating into a shell. Of course, there are exceptions, but we see Muslim boys and girls in a school or college having their own friends groups. Even the other communities and castes have their own groups. Common mother tongue or common culture may be the driving force that creates such comfort zones. But it was not so in our student days, decades back. The friend groups among the students then were of book worms group, not very studious students group, bold and outgoing students group, shy and reserved students group, etc., In the present trend, same religion groups are seen in many other walks of life too. This is by no means a healthy development since it hinders interfaith interactions.

WhatsApp groups
This pattern of formation of the same religious groups is also pronounced in every community’s WhatsApp groups and social media groups. Common culture, interests, beliefs, and language are the reasons behind such religious segregation among all castes and communities. Many WhatsApp groups have become “of the Muslims, Muslims, and Muslims.” No serious subject is discussed in such groups and is just an exchange of greetings or religious forwards or some Urdu poetry. This is sad indeed since there is no exchange of thoughts and feelings between different communities, which could have helped remove many misunderstandings. This is what Swami Vivekananda described way back in 1893 in his speech in the Parliament of World Religions that the Hindus, Muslims, and Christians are sitting in their own little well and think that the whole world is just their well.

The way forward
Social media posts and arguments create a rift between religious communities, and politicians are driving a wedge between the communities for electoral gains. Not to be left behind, TV anchors in the infamous debates are spreading animosity between people instead of trying to forge mutual ties of healthy relationship based on mutual trust. In this environment of mutual distrust and suspicion, it is all the more necessary to make efforts to build bridges between communities. Despite trolling, hateful speeches, lynching, and other provocations, a huge majority of Muslims and Hindus have shown restraint and upheld the spirit of unity in diversity. Many authors have written articles in national newspapers upholding truth and justice, cutting across religious lines.

Building on this interfaith relationship is the only way forward for peace and progress.
Though not exhaustive, the following measures are suggested for Muslims. I am aware that some readers may ask why such advice is given only to Muslims. True, interfaith good relationships are possible with an effort from both sides. Admittedly, we live in a communally vitiated atmosphere with hateful propaganda, calls for genocide of Muslims, virtual auction of Muslim women in an internet app, lynching, distortion of history, and whatnot. How to deal with such provocations, politically and legally, is not the subject matter of this article. It is also not denied that Muslims have shown much patience and tolerance. The intention here is to reach out to well-meaning persons in the Hindu community who are mooting for better interaction and understanding with Muslims. We should not be found wanting to reciprocate such efforts. It would be even better if we took the initiative in this regard. The simple measures suggested are:
1) Every Muslim should cultivate a friendly relationship with persons from other religious communities.
2) Wherever possible, Muslims should reside in cosmopolitan areas where our children should mix and play with children of all religious communities.
3) Mutual participation in the religious festivals of each other at the social level (and not religious level) or at least wishing them on occasion will develop the much-needed bonhomie.
4) Mutual participation in weddings and other family functions of each other will help develop closer ties.
5) Children should have interfaith friends in schools and colleges. Such friendships are remembered for years.
6) WhatsApp groups should also have members from different faiths, but religious conflicts and arguments should be avoided.
7) In times of natural calamities and emergencies, social service and humanitarian aid should be given irrespective of caste and creed. Muslim NGOs in Karnataka have shown the way in the recent Covid 19 lockdown by cremating the dead bodies of Hindus. They even took care of the Covid patients in the hospitals and gave a helping hand to the attenders of the patients irrespective of the community to which they belonged. Many Muslim organizations have involved themselves actively in relief work in times of disasters, calamities, and accidents for many years, and this good work has to be continued.
8) Muslims should stop reacting emotionally to provocations but should hold consultation (Mashwara) with responsible community members.
9) Our Ulema should be proficient in languages other than Urdu too and should interact with Hindu and other religious heads.
10) Interacting with others in the regional language is a must for Muslims.
11) Muslims should also involve themselves with mainstream NGOs working in the field of human rights, animal welfare, environmental protection, child welfare, women welfare, anti-pollution, senior citizen’s welfare, leprosy patients welfare, and welfare of physically and mentally handicapped persons.
12) Non-Muslims will not read the Qur’an or the Ahadees; they form an opinion about Islam from seeing the Muslims. Muslims should maintain good relations with their non-Muslim neighbours, landlords, classmates, colleagues, and friends. Muslims should realize that they are the ambassadors of Islam.
There are many other actions that could be added to this list. Each of us has an obligation to make efforts for communal amity and peaceful co-existence. Islam recognizes ideological differences between different religions but advocates the policy of tolerance and respect for one another in everyday dealings. Instances from Prophet Muhammad’s (peace be upon him) life reveal that he practiced religious tolerance with the other faiths when Muslims were in a minority in Makkah and when they were in the majority in Madinah.