“Love and Compassion Will Keep Us United”

Islamic Voice 0 May, 2016 12:00 am
Muslims Hand Out Roses In London
Honouring Moroccan King Who Helped Save Jews
What These Two Women Can Teach Us

Pledging to work together for peace and harmony in the world, Shias and Sunnis in Bengaluru, join hands with Iraqi scholars and intellectuals. 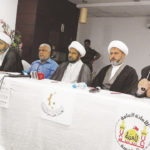 Talking together, eating together, praying together and conveying the message of peace to each other, marked a historic gathering of Sunni and Shia religious scholars, leaders and intellectuals in Bengaluru, from April 22 to April 25, 2016.
A delegation from Iraq comprising religious scholars and intellectuals arrived in the city with a message of love for humanity, harmony for the world, and a heart full of love for India for its spiritual and cultural richness. Grace, dignity and gentleness marked the occasion, as the Iraqi delegation met a gathering of journalists to share their joy about the cultural festival being held to coincide with the birth anniversary celebrations of Hazrat Ali Ibn Abi Talib.
“Imam Ali stood for humanity. His values of love, etiquette, grace, manners and gentleness are a model for the world. Remembering his virtues, we hope to mingle the cultural and spiritual richness of India and Iraq through this four-day festival,” said Aga Sultan, convenor and co-ordinator of the festival, who explained the contents of the festival, which included a book exhibition, Quran recitation sessions, recitation of poetry, religious lectures and quiz contests. Religious scholars from the Holy Shrines in Iraq, Maulana Sheikh Ali Asadi from the shrine of Hazrat Abbas, Maulana Sheikh Rafid, from the shrine of Imam Husain and Maulana Sheikh Qasim, from the shrine of Kazmain, were part of the Iraqi delegation.
The festival was held at Masjid-e-Askari and Bab ul-Hawaej Hazrat Abul Fazlil Abbas, Sir Mirza Ismail Nagar, Bangalore. This is the fourth such annual cultural festival. Along with the festival, under the banner of Ittehade Bainul Muslimeen over a 100 Shia and Sunni scholars, intellectuals and leaders put their heads together on April 23, to find ways and means to live together peacefully as one united humanity. The discussions kept the focus on Islam as a religion of peace, stressing that not let any force divide people on the basis of sect, faction, and ideology. That extremist forces who are all set to tarnish the spiritual and peaceful image of Islam should not be encouraged and that all peaceful efforts to stop their onslaught should be made was the unanimous resolution after the discussions.
“It is wrong to link Islam with terrorism. The Prophet (pbuh) taught that love and compassion are part of faith and we should follow him and live together. We should not bring in different ideologies and sects. We are all human beings, believing in One God,” stated Mufti Mohammed Ashraf Ali Baqavi, rector Darul Uloom Sabeelur Rashad, Bangalore.
Addressing the gathering, Maulana Dr. Syed Kalbe Sadiq, Vice-President, All India Muslim Personal Law Board, stated: “God, Prophet Muhammad and the Ahle Bayt have advised us to live together and be united. On the other hand, Satan preaches not to be united. So, you take your decision, whom you would want to obey”God or Satan?”
Khateeb and Imam of Jamia Masjid, city market, Bangalore, Maulana Maqsood Imran made an appeal that we should all be united on the basis of the kalima and forget the minor differences. Dr. Hafizur Rahman, founder Sufi Peace Foundation, New Delhi, said that the “Sufi way” of acceptance of all people as one humanity was the need of the hour. He said that even today many people from other countries who visit India make it a point to pay their respects at various Sufi shrines in the country and this shows their reverence and respect for Islam, which spread in India due to the compassionate, kindness and gentle charisma of the Sufi saints.
Maulana Syed Rifae, while addressing the gathering, suggested that we should put away all the minor fiqhi differences and work together as one humanity for society.
Aga Sultan, convenor of the cultural festival, stated that it was very creditable that Shia and Sunni scholars, intellectuals and leaders from different parts of Karnataka had come together to welcome the delegates from Iraq in a spirit of love and compassion.
As I departed from the conference, rays of hope, unity, harmony and peace were beginning to spread all around. I hope it brings together people from different traditions together in a bond of love and peace”¦virtues and principles that Imam Ali stood for.