Message from the Pontifical Council for Interreligious Dialogue for Ramadan

Islamic Voice 0 July, 2015 12:00 am
Islam and its Message to the Modern World
Spaces for Oneness
Muslims Perform Funeral Rites of Kashmiri Pandit Woman

Christians and Muslims, together to counter violence perpetrated in the name of religion 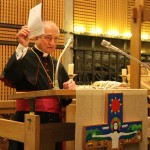 Vatican City: “Christians and Muslims: Together to counter violence perpetrated in the name of religion” is the title of the Message from the Pontifical Council for Interreligious Dialogue for Ramadan, which began this year on 18 June. The document, signed by Cardinal Jean-Louis Tauran and Fr. Miguel Angel Ayuso Guixot, M.C.C.I., respectively president and secretary of the dicastery, is dated 12 June.
“For some of you and also for others from other religious communities, the joy of the feast is shadowed by the memory of the dear ones who lost their life or goods, or suffered physically, mentally and even spiritually because of violence. Ethnic and religious communities in a number of countries of the world went through various and enormous unjust sufferings: killing of some of their members, destruction of their religious and cultural heritages, forced emigration from their homes and cities, molestation and rape of their women, enslavement of some of their members, trafficking of persons, commerce of organs, and even selling of cadavers!
“We are all aware of the gravity of these crimes in themselves. However, what makes them even more heinous is the tentative of justifying them in the name of religion. It is a clear manifestation of instrumentalising religion for gaining power and richness.
“Needless to say that those who have the responsibility of security and public order have also the duty to protect their people and their properties from the blind violence of the terrorists. Besides, there is also the responsibility of those who have the task of education: families, schools, curricula, religious leaders, religious discourse, media. Violence and terrorism are first conceived in the mind of the deviated persons, thereafter perpetrated on the ground.
“All those are involved in the education of the youth and in the various educational spaces should teach the sacred character of life and the derived dignity of every person, regardless of his or her ethnicity, religion, culture, social position and political choice. There is no life that is more precious than another one because it belongs to a specific race or religion. Therefore, no one can kill. No one can kill in the name of God; this would be a double crime: against God and the very person.
“There cannot be any ambiguity in education. Christians and Muslims, according to their respective religious tradition, look at God and relate with Him as being the Truth. Our life and behaviour as believers should reflect such conviction.
“According to St. John Paul II, Christians and Muslims have ‘the privilege of prayer’ (Address to Muslim Religious Leaders, Kaduna, Nigeria, 14 February 1982). Our prayer is much needed: for justice, for peace and security in the world; for those who have deviated from the true path of life and commit violence in the name of religion, so as to return to God and change life; for the poor and the sick.
“Our feasts, among others, nourish in us hope for the present and the future. It is with hope that we look at the future of humanity, especially when we do our best to make our legitimate dreams become a reality.
“With Pope Francis, we wish that the fruits of Ramadan and the joy of ‘Id al-Fitr may bring about peace and prosperity, enhancing your human and spiritual growth”.