No Discrimination against Sunnis in Iran’ 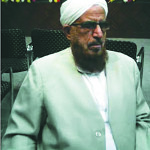 New Delhi: Asserting that there is no discrimination against Sunnis in Iran, Maulana Nazir Ahmad Salaami, who is the lone Sunni member of the influential religious body ‘Majlis-e- Khabargaan Rehbari’, i.e., Guidance Council, said the majority Shias and the minority Sunnis were living in peace and amity in Iran and an atmosphere of peaceful coexistence prevailed in Iran.
Salaami was in Delhi recently to attend the celebration of Hafta-e-wahdat on the eve of Prophet Muhammad’s birthday. Talking to Islamic Voice on a range of issues here at the Iran Cultural House, Maulana Salaami said Sunnis account for 15 to 20 per cent of the total population of the country and of the 31 provinces, three were Sunni-majority provinces i.e. Baluchistan/ Sistan, Kurdistan and Gulistan in the north. He said Sunnis are also in sizable numbers in at least seven other provinces. Salaami who hails from the Iranian province of Baluchistan, studied in Jamia Karachi, Pakistan and speaks chaste Urdu. Here are the excerpts from an interview:

Q: Why is the Iranian government reluctant to permit construction of a mosque for Sunnis in the capital Tehran where around one million Sunni Muslims were living?

Salaami: The government had shown willingness to concede this long-standing demand. However, there were some security issues due to the recent happenings in neighbouring Pakistan and Afghanistan where Shias and Sunnis were attacking and bombing each other’s mosques”.
Q: The government of Islamic Republic of Iran’s follows the laudable credo laa Shia, wa laa Sunni” (neither Shia, no Sunni). But its Constitution debars Sunnis from contesting the presidential elections as “the Article 12 of the Iranian Constitution defines the official religion of Iran to be Ethna Ashari (Twelver Shiism)?
Salaami : It is not a new provision as it has existed since the days of Shah. It is irrelevant to Sunni population as no Sunni candidate can win the election. One bad-thing does not cancel many other virtues of Iran as there is no discrimination in government jobs and in appointment to important political positions. The deeni madrassas run by the Sunnis get same government’s grants as well as incentives as Shia madrassas avail. All sects of Muslims and non-Muslims have full freedom to practice their own religion.

Q: Could you point out as to how many Sunnis were appointed as governors and ministers in the central government?

Q: How does the Iranian government view the ISIS and the groups like Jabhat al-Nusra?

Salaami: These groups are defaming the fair name of Islam and perpetrating the brutalities against fellow Muslims in the name of Jihad. They are playing into the hands of enemies of Islam. They consist of elements who have gone astray.

Q: Why Iran is supporting a tyrannical and dynastic regime in Syria while she opposes other monarchs in the Middle East?

Salaami: Our leaders have maintained that Tehran is not supporting Bashaar al-Assad as such. We are extending material and political support to Syria because she is the only country in the region which has been steadfastly withstood against the Zionist regime. If militant groups succeed in capturing power, resistance to Israel will end. They are also of the view that Syrian crisis cannot be solved militarily.