Setting the Cat among Pigeons

Islamic Voice 0 October, 2012 12:00 am
Anna sounds vague on Muslim issues
Rana Safvi: ‘Age is not a barrier – You can always start afresh’
Interview 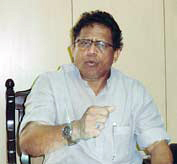 Name of Anwar Manippady, the chairman of the Karnataka State Minorities Commission, unnerves many a Muslim politician in the state. Distinct in style, the first non-Urdu speaking chairman is known for setting the cat among the pigeons and leaving several people shamefaced. Yes, he comes from the BJP rank and file. And that earns his antagonists an easy alibi to target him. So far known for its
sedate chairmen, the Karnataka State Minorities Commission, was never expected to get into activist mode. His inspections of the 120-year old Muslim Orphanage, Taha Trust, Karnataka Board of Awkafs’s Darul Awkaf headquarters, and several institutions in the districts have clearly embarrassed officialdom hitherto unused to brooking any interference into their sanctuaries. Maqbool Ahmed Siraj talked to the activist chairman and queried him on his style and the outcome so far. Excerpts from his interview:

Q: Is the Commission Chairman acting within his jurisdiction while raiding the minority-related institutions?

A: These are not raids. We have visited and inspected them and their functioning. There is no ulterior motive. The Commission is empowered under section 10(i)H, J and section 12 of the Minority Commission Act 1994 to look into the functioning of these institutions, and recommend and ensure the implementation of the laws, regulation and welfare measure meant for the minority related institutions. We are very well within our jurisdiction to use the state machinery for the implementation measures. I have suspended 54 officials so far  for inefficiency or dereliction of duty.

Q:The Wakf Board Chairman has stated that you entered the Darul Awkaf unauthorisedly and took picture of the files that were being shuffled for classification purpose?

A: The files were not being shuffled for classification purpose. They were being segregated for removal of important documents that were being sought through RTIs and were meant for destruction. Hundreds of Wakf properties in Karnataka are being encroached,
sold out, embezzled or occupied. It is so because the Wakf Board and corrupt mutawallis, the very custodians of the properties,
have been hand in glove to allow their misuse, misappropriation and illegal occupation. This has been going on for years without
end. And the entire Muslim leadership of Karnataka either colluded or connived with the encroachers. Take for instance 18 acres of
wakf land at Gurubaidoddi in Ramanagram district. It was encroached upon by one Thimmegowda for a sugar factory. He had erected the fence around. 280 Muslim houses in the vicinity were razed and people were driven out. Several representations by the local
Muslims to the Wakf Board and the Minorities Commission went unheeded. All these years, the Muslim leaders paid lip service to get this land vacated.

Nothing happened. I took up the case and got the land vacated with the help of the government machinery. We have found that Thimmegowda could do all this in cahoots with the Wakf Board and Muslim politicians. It was for the first time after 20 years that the local Muslims got back their 6.24 acre Eidgah and prayed Eidul Fitr prayers there. (A delegation of the Gurubaidoddi Muslims was
in the Commission office and testified to this scribe the accounts.) One could question as to why the Wakf Board did not act? Why the Urdu newspapers did not highlight these scams? 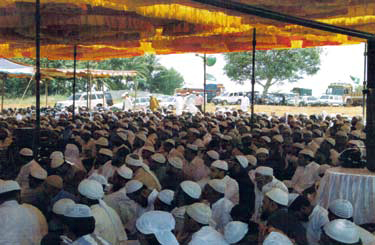 Q: Doubts have been raised about the authenticity of the 7,000-page Wakf scam report that alleges misappropriation of the properties valued to the extent of Rs. 2 lakh crore. Your comments.

A: Following the presentation of the report, several more scams have come to light and people have been bringing to me more and more cases of misappropriation of the wakf property. I believe now the value of properties lost has gone up to 2.30 lakh crores. As for
the 7,000-pages of report, much of it consists of land related documents, RTI information, gazette notifications etc. We have worked for close to five months on its preparation. Lok Ayukta has begun filing FIRs following the presentation of the report. Our observation says that all wakf properties have been shrinking from one survey to another survey (held every 30 years) and we have found evidence of one or the other Muslim politicians involved in their misappropriation. What happened to 650 acres of Wakf property in Belahally in Bangalore north? Why a 2-acre property in Gangavati should be rented out to an institute run by a former minister for a rent of Rs. 1,100 a month when it should fetch them Rs. 40,000 at the minimum? Why should it be leased out for 113 years when the
Central Wakf Act mandates that no property could be leased out for more than three years. How could the 200 acres of wakf land in Waderpura near Bangalore be leased out to a Muslim MLA from Bangalore? How does it happen under the ‘watchful eyes’ of the Wakf Board? I am ready to be crucified if I am wrong.

Q: Taha Trust has rebutted your allegations against them. Your take on this?

A: Taha Trust building stands on a Wakf land. It was given to them for the express purpose of running coaching institutes for
competitive exams for Muslim boys and girls. They have converted it into a shadi mahal and lodging for the working men against rents. The library on the top floor has never functioned. It does not have any books. One of the trustees in the said trust was also the  principal secretary of the Department of Minority Welfare. In his tenure, a portion of the building was leased out by the Department. Why should the thousands of application for Department’s scholarship remain lying there without being scrutinized? Who are they
fooling?