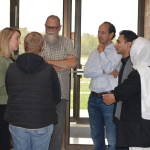 Plainfield: (USA) Rejecting hate message of anti-Muslim protesters, interfaith leaders and members of the Shoulder to Shoulder campaign joined a Friday service held at the Islamic Society of North America (ISNA) Headquarters in Plainfield, USA, last month, showing their support and solidarity after threat of armed protests. “We are overwhelmed by the love and support of our interfaith friends who took the time out of their day to stand by our sides,” ISNA Secretary General, Hazem Bata said in a statement sent to OnIslam.net. Bata was referring to the anti-Muslim “Global Rally for Humanity”, scheduled for October 9th and 10th in more than 20 cities across the US. Responding to the calls of hate groups, ISNA urged Muslims to engage with their wider society, building coalitions and relationships. Bata cited the example of the Prophet’s treatment of people, including enemies, with kindness, and how this changed one individual from an enemy of Islam to one of its great leaders. “Thankfully these protests do not represent a majority of the American public, however they do represent a national rhetoric of anti-Muslim bigotry that has grown pernicious and widespread,” Catherine Orsborn, campaign director of Shoulder to Shoulder, said in a statement published on the campaign’s website. Shoulder to Shoulder is a coalition of 31 religious denominations and organizations committed to ending anti-Muslim sentiment in the United States.
[Extracted from: (www.onislam.net