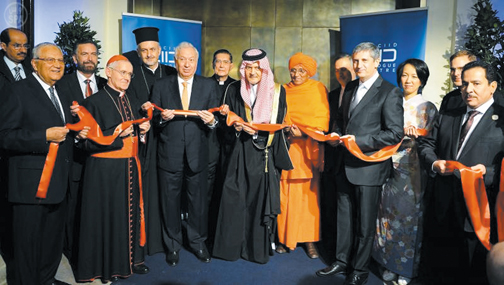 The King Abdullah Bin Abdul Aziz International Center for Inter-religious and Inter-cultural Dialogue (KAICIID) opened last fortnight. The opening ceremony was attended by Austrian Foreign Minister, Michael Spindelegger, Spanish Foreign Minister, JosÃ© Manuel GarcÃ­a-Margallo, and hundreds of religious leaders. The center, launched by Saudi Arabia as an international organisation with multi-faith oversight, aims to help religions contribute to solving problems such as conflicts, prejudice and health crises rather than be misused to worsen them. “The prime purpose is to empower the active work of those in the field, whether in the field of dialogue, of social activism or of conflict resolution,” said Jerusalem-based Rabbi David Rosen, representing Judaism on the nine-seat board of directors. The center plans to work first on improving how religions are presented in media and schoolbooks, involving faith leaders in children’s health campaigns in poor countries and hosting religious leaders for fellowships at its Vienna headquarters.