Islamic Voice 0 September, 2013 12:00 am
Canada – ‘Judges may order Witnesses to Remove Niqab’
Many Young Britons do not Trust Muslims: BBC Radio 1 Survey
Interfaith Dialogue on Tolerance and Fear of Islam 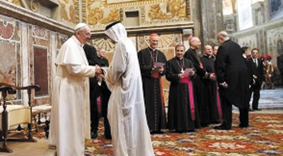 In a demonstration of what the Vatican spokesman called Pope Francis’ “particular attention to relations with the Muslim world,” the pope personally signed the Holy See message for Muslims at the end of Ramadan, calling for “mutual respect through education” between Christianity and Islam.
“We are called to respect the religion of the other, its teachings, its symbols, its values,” Francis wrote in a statement distributed by the Holy See.
“We have to bring up our young people to think and speak respectfully of other religions and their followers,” said the message, which stressed the enhanced role that education must play in building respect for different religions and the need “to avoid ridiculing or denigrating their convictions and practices.”
“As an expression of esteem and friendship for all Muslims,” Francis decided to personally sign his good wishes to Muslims worldwide on the feast of Eid-ul-Fitr. Historically, the Pontifical Council for Interreligious Dialogue has delivered the message on behalf of the Holy See. The last pope to send a personal message to Muslims was John Paul II in the aftermath of the Persian Gulf War in 1991.