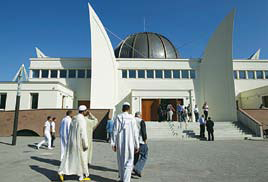 Eastern France largest mosque was opened on September 28 in Strasbourg by France Interior Minister Manuel Valls. The Strasbourg
mosque, which was designed by Italian architect Paolo Portoghesi and seats 1,500 worshippers, was completed after more than 20 years of infighting between right and left wing administrations in Strasbourg. France new Grand  Mosque has a capacity of 1,300 square meters (or 14,000 square feet), making it 1.5 times as big as the previous largest one in France, at Evry in the Paris  suburbs. Valls speaking after inauguration said: “France’s Muslims can congratulate themselves on the singular model that they are building but warned the  community that the Government would not tolerate fundamentalists. Valls praised the wisdom of Muslim  leaders, who have called
their followers to keep calm following the publication of the caricatures by the Charlie Hebdo Weekly.