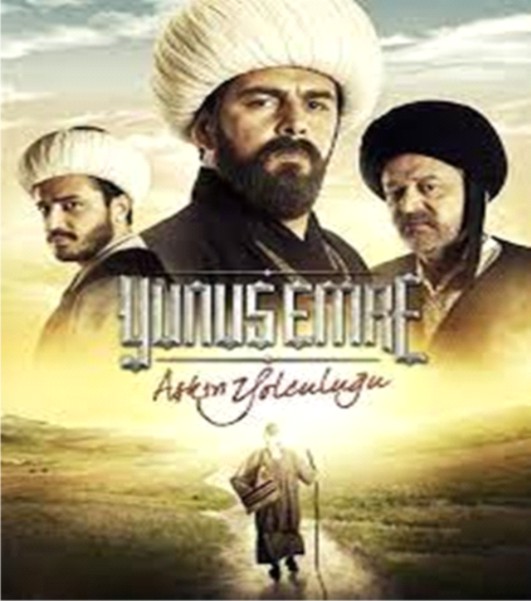 Yunus Emre: Aşkın Yolculuğu I need You only You

The Turkish showbiz industry is producing megahits back to back. Who is unaware of the riveting hits like Diriliş: Ertuğrul and Kuruluş: Osman nowadays? These serials, in fact, attracted a large viewership equally in the country itself and abroad. In the queue of these serials, one blockbusting serial is Yunus Emre: Aşkın Yolculuğu (Yunus Emre: The Journey of Love). Originally produced in 2015-2016, the biographical and historical drama serial is based on the life of the famous Turkish Sufi poet Yunus Emre who lived between the thirteenth century and the first quarter of the fourteenth century Anatolia (Turkey). Like Diriliş: Ertuğrul, on the recommendation of Prime Minister of Pakistan-Imran Khan, this drama serial was broadcast on the state-run Pakistan Television, with Urdu dubbing, under the title Yunus Emre: Rah-e-Ishq (Yunus Emre: path to Love) and has gained popularity among its mass viewers. It is also available with subtitles in different languages on various channels of YouTube and other social media networks.

Replete with the spirit of Tasawwuf, the serial covers the important concepts of Shari’at (exoteric path), Tariqat (esoteric path or the path to realization), Haqiqat (the inner Truth) and Mu’arifat (the self-realization and realization of God) seen in the Journey of Love taken by its protagonist –Yunus. Beginning as a Qaḍi (judge) of Nallihan (a town in Turkey), he claims to have mastery of the knowledge of Shari’at. He is curious, eager, bold, and confident enough to implement it. Meanwhile, he meets a Sufi Sheikh- Tapduk Emre, apparently an illiterate old man, with whom he finds an actual treasure trove of ‘Ilm (knowledge and wisdom). Impressed by his wit, vision, and knowledge, and humility, he leaves his profession and accepts to be a Dervish in Tapduk Emre dergâh (lodge) and starts to walk on the path of Tariqat.

Breaking through a series of trials and temptations with Riyāḍat (religious exercise or devotion) and Adhkār (remembering and praising God), he gradually reaches Haqiqat (the inner Truth). He becomes a visible manifestation of the Hadith e Qudsi, which mentions “…My servant continues to draw near to Me with supererogatory works so that I shall love him. When I love him, I am his hearing with which he hears, his seeing with which he sees, his hand with which he strikes, and his foot with which he walks. Were he to ask Me, I would surely give it to him, and were he to ask Me for refuge; I would surely grant it to him….” In other words, Qaḍi Yunus (Shari’at) gives birth to Dervish Yunus (Tariqat), which in turn gives birth to Yunus Emre (Haqiqat). As one of the serial dialogues suggests, Emre means Lover (Aşık).This all becomes possible through the strong Musa and Khiḍr bond between Yunus Emre and his Murshid (spiritual guide)- Tapduk Emre. Tapduk Emre facilitates Fana (annihilation) of Yunus’s self-consciousness, i.e., he helps him to shun the multiple identities of his I-ness so that to make him Hanif and Mukhlis (upright and sincere) in Love towards his God by invoking the Divine attribute of Jalal (Majesty) believing that one can reach his destiny more quickly by experiencing the Divine attribute of Jalal (Majesty) than experiencing His attribute of Jamal( Beauty). He guides Yunus in crossing the different stages of Nafs – like Nafs al Ammara(the evil commanding self), Nafs al Lawwama( the reproaching self), Nafs al Mulhima (the inspired self ), and directs him to reach the door of Nafs al Mutma’innah ( the satisfied self). Here he becomes exposed to the secret of al-Haqq (The Truth). After Nafs al Rāḍiyyah (the pleased self) and Nafs al Marḍiyyah (the pleasing and gratifying self) he brings him to the stage of Nafs al Sāfiyyah (the complete self). He reveals to him the secret of Wilāyat (companionship of the Beloved). Reaching this level, every speck of Love for other than God vanishes from his heart, and he becomes ‘Arif- he knows himself and finds his Beloved. And from here, his Baqa (Subsistence) starts, and now he lives with and only for his Beloved God.

The drama serial shows Yunus Emre, the hater of poetry, in the beginning, and it finishes turning him into a full-fledged Sufi poet. When his heart begins to speak, it speaks in the form of poetry. He chooses for his poetry plain spoken Turkish – the language of the common people at large and not the literary language of his time. Eventually, He becomes the poet of the people, pouring eternal truths into their hearts with clarity and making them unite with God. Through the medium of poetry, he expresses Divine Love and mystical concepts like Wahdatul Wajood (Unity of Being), which presents the message of tolerance and Love for humanity, and other things. This serial is a beautiful piece, filled with Love in the form of melancholy and ecstasy resulting from Jalal and Ikrām (Majesty and Honor) of the Beloved, who is Dhul Jalal- i wa al Ikrām (The owner of Majesty and Honor). The Love turns the life of Yunus Emre into what is called Sokhtan Nātamām (ever-burning fire of longing) manifested through his cravings for seeing his Beloved:-

It is brimmed with rich dialogues and moral lessons, this serial answers many abstruse and philosophical questions in a beautiful, clear, and distinctive way. It depicts Turkey’s glorious legacy in particular and the Muslim world in general. It would not be exaggerating to say that Turkey has proved that media could build rather than corrupt and devastate society morally. That entertainment is much more than it is considered today.