A Black Kite’s Flight to Freedom

It does not matter how important your work or meeting may be, if you see a fellow creature, a bird or an  animal, or even a tree, in distress, try to reach out to help! 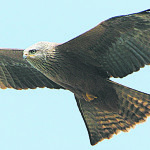