A scientist picks up shovel to breathe a new life into a river that lay dead for nearly two centuries in Muzaffarnagar district of Uttar Pradesh. 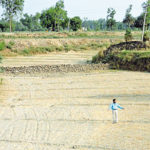 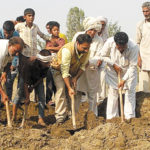 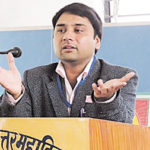 The river is dead, but the spirit of its beneficiaries is alive. People whose ancestors lived and drew their sustenance from its basin are out with shovels and pickaxes to revive it. They have launched a movement to blow a new soul into the Katha river that used to be the lifeline for the people of the area, not far from the national capital Delhi.
Heading the movement is environmentalist, Dr. Mohammad Umar Saif who heads the Natural History and Conservation Centre at Shamli in Muzaffarnagar district. He along with a dedicated team of scientists, ecologists, researchers and students together with villagers are trying to excavate the Katha river back to life in order that farming gets a boost in this part of the Muzaffarnagar district.

Life Sucked Out
Contacted over phone from Bengaluru, Dr. Saif told Islamic Voice that it used to be a river that ran about 150 kilometres descending from Shivalik Hills and drained in Yamuna near Kairana in Uttar Pradesh. Around 1820, the British took out the East Canal from Yamuna which sucked the life out of it. As the water streams dried, the people encroached upon its bed and began to put up farms. According to Dr. Kamal Bahuguna, his colleague from the Centre, thousands of birds used to migrate to the site for millennia. The transformation took it from initially being a floodplain of the River Yamuna to farms. Saif says, the river used to harbour alligators and nearly 147 different species of birds and insects, some of them very rare. Gradually, the entire ecosystem was degraded and destroyed and now it is merely a path for flow of rainwater during the monsoons.
Dr. Saif who is working with Himalayan Institute for Ecology and Environment and Development in Dehradun in Uttarakhand, studied the area that lies just 95 kilometres east of Delhi. He found that excessive extraction of groundwater and drying up of river was sounding a death knell for the area. The groundwater which used to be available at 10 feet some 30 years ago, has now gone down to nearly 150 feet. He approached Mr. Anand, gram pradhan of the Malakpur village and found in him a person who was acutely aware of the miserable ecological conditions of the area. The villagers are also contributing voluntary labour.
Building Check Dams
The work began in right earnest. The Himalayan Institute came forward to take up the eco-restoration of the one kilometers stretch of the river and build some check dams so that rainflows could be pooled into a series of waterbowls along the river’s path. The flow path already has several depressions which could be easily turned into lakes with minimal civil work. He says the plan is to create a series of check dams backed by small lakes which will be around 50 metres wide. He expects around 90 lakh cubic litres of water could be stored into these lake systems which will recharge the ground aquifers and boost agricultural production in the area. District collector Sujith Kumar who visited the excavation work has assured inclusion of the work under Mahatama Gandhi National Rural Employment Guarantee Scheme.
Saif says the Centre will plant around 10,000 trees during July 1 and 10 this year when the monsoon is expected over the region. They will also develop a butterfly park and a lotus pond in the area to develop this into a recreational spot.
Duty of a Custodian
Dr. Saif who studied M.Sc in Wildlife followed by Ph.D. in Environmental Science, says he was inspired by the Quranic term of khalifa (custodian or uttaradhikari in Hindi), and applied it to his area of work. He says, now I apply this duty of maintaining and managing the earth resources between my two namaz. “I hope these will benefit the people regardless of their caste, creed and faith and will earn him Divine rewards too”, he said.
(Dr. Umar Saif can be contacted at cell: 98373-34033. Email:[email protected])