The RFID Model which is in the process of being patented, enables detection of human beings at a particular location. 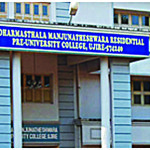 Ujire: An RFID model prepared by Syed Aurangzeb, a Pre University student at the Shree Dharmasthala Manjunatheshwara PU College in Ujire in DK District of Karnataka has fetched Rs. 23 lakh for the youth by way of awards, stipends and monetary assistance.
The Radio Frequency Identification (RFID) model was presented at the international level Science Model Competition organised by the Indian Institute of Technology, Hyderabad last month.
The model received Rs. 18 lakh from American College Council, a sum of Rs. 5 lakh from IIT-Delhi and Rs. 20,000 from Government of Karnataka.
The RFID Model which is in the process of being patented, enables detection of human beings at a particular location. In wearable mode, it can monitor a person’s presence at a particular location. It can enable firms, workshops and factories to monitor their workers’ presence, the precise timing of work, their entry and exit at the worksite. It can even enable people to locate their pets and alert about their straying, and can even be fixed on inmates in jail, remand homes and other such places. Hooked to the cloud computing, it can store nearly one terabyte of information.
Further research is being conducted on the device at the AIIMS College, Delhi.
Syed Aurangzeb is son of Nayyara Banu and her late husband Syed Ali of Benton Halli village in Bellur taluk of Hassan district.
SDM College of Belthangady is known for its serious academic record and extremely disciplined students. It is run by Swamiji Shri Veerendra Heggade of Dharmasthala Mutt.
Principal of the College has complimented Syed Aurangzeb for the innovation. n
(By A Staff Writer)