Islamic Voice 0 June, 2017 12:00 am
From Imam Ghazali To The Theory of Quantum Mechanics
Flower on the hair – new fashion trend
New Device for the Visually-Impaired 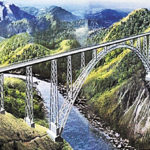 After the longest tunnel, Jammu and Kashmir will have the tallest river bridge. It is being built over the River Chenab between places called Bakkal and Kauri in Resai district of the state. On completion, it will have a length of 1.3 kilometres and will stand 359 metres above the river Chenab. It is being built by the Indian Railways. The work on the bridge started in 2010 and is expected to be over soon. The bridge is expected to be the highest rail bridge in the world. It will be five times taller than the Qutub Minar of Delhi and far taller than the Eiffel Tower of Paris. A massive steel arch will top the bridge and will take the weight of nearly a thousand ton heavy train. The railway line will pass over the steel arch. The steel being used is 63-mm thick blast-proof metal. Footpath and a bicycle trail will run along the rail line. The bridge will be quake-proof and can withstand 260 km/hour windspeed.