Islamic Voice 0 November, 2016 12:00 am
7th South India NGOs Conference – Social Hero Awards 2018
Vatican Signs First Treaty with ‘State of Palestine’
I am Sorry Convent of Jesus and Mary, For, I Have Failed You! 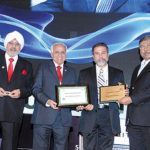 The “Bearys Group” has bagged two prestigious awards from the Indian Green Building Council (IGBC) in the recently held Green Building Congress 2016, Mumbai.
While the first IGBC Green Place of Worship Award (in the Platinum category) has been conferred on Badriya Jum’a Masjid, the World’s first Green Mosque in Kodi, Kundapur, the second award has been bestowed on Mr. Syed Mohamed Beary in recognition of his relentless efforts in promoting the Green Building Movement in India. He has been honoured with the “IGBC Senior Fellow” Award.
Syed Mohammed Beary hailing from Kundapur in DK district of Karnataka began as a real estate agent 35 years ago and single-handedly built the group of companies that are into development and constructions. Besides, the Group has set up a string of schools and institutes including an engineering college, a college of architecture in the DK district.