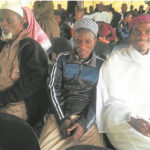 Pondoland (South Africa): In the windswept hills at the heart of Pondoland, in South Africa, a new beacon of spirituality has opened its doors to the local community. The Mgezwa Mosque and Islamic Community Centre were officially opened recently in the Eastern Cape. The Centre was opened by Induna Fikile of the Amapondo tribe, in the presence of local, tribal and South African Muslim dignitaries.
About 500 community members attended the event. The Centre will not only be utilized for prayer, but also public talks, daily Islamic school, children’s feeding scheme, distribution of blankets during winter and as a public space for the local community.