Pedalling for the President 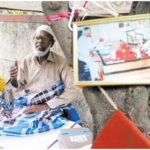 Tailor who cycled 2700 km to meet Kalam narrates how the former President ignited his mind
Chennai: Seventy-year-old S Nagoor Meraan is a tailor by day and a watchman by night. Meraan is one of those scores of people whom you wouldn’t bother giving a second glance unless you come across his photograph with former President Abdul Kalam that adorns his makeshift workplace under a tree in Thiruvanmiyur, in Tamil Nadu.
Pointing to the photograph, he recollects the story of pedalling all the way from his hometown Tenkasi in Tamil Nadu to Rashtrapati Bhavan in New Delhi (over 2700km) in 2003 to meet the former President. The journey lasted 35 days. During the journey, he camped at police stations, open spaces and even strangers’ houses. “Curiously enough, not even once did my cycle tyres get punctured,” says Meraan, who’s now into his 70s. Initially, his plan of meeting the former President was met with uncertainty. “When I reached Delhi, I couldn’t meet him immediately. I wrote a letter of my mission and dropped it in a guest box on the Rashtrapati Bhavan premises. Fortunately, he read the letter and extended an invite,” he says.
Meraan dined with Kalam during the rendezvous that spanned 35 minutes. “I had taken along with me a shawl to present to him. But he declined the offer citing the presence of many homeless in the capital city suffering due to extreme cold and asked me to give that to one of them,” he recollects. He stayed in the official residence for two-and-a-half days and had his brush with a few politicians. During the time, they discussed issues such as world peace, humanity and a charter of demand for Meraan’s hometown among other things.
(Extracted from http://www.timesofindia.indiatimes.com)