Resham has set her goals high and dreams to join the civil services and become an IAS officer to bring change in the society. 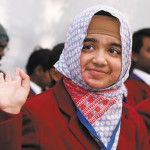 New Delhi: The highest National Bravery Award winner for this year, Resham Fatma, who survived an acid attack by none other than her relative, strongly advocated for death penalty to cruel offenders of such heinous crimes.
Resham Fatma, who received the coveted Bharat Award on Republic Day, demanded death penalty to acid-attackers “ an intrinsic urge that finds expression in the wake of hellish experience she went through due to the acid attack. However, the 16-year-old Lucknow girl mustered courage to stand up and fight her assaulter, precisely to teach her tormenter a befitting lesson.
She said these tormentors made life hell to acid-attack survivors and they should be given capital punishment to discourage this cruel evil from the society.
Resham Fatma was chosen for the Award for displaying exceptional bravery, out of 24 children selected for national Bravery Awards for 2014, by the Indian Council for Child Welfare (ICCW). Her story of rare grit and determination is an inspiration for others.
Talking to Islamic Voice, Resham narrated her ordeal at the hands of her distant (maternal) uncle. She said as usual on February 1, 2014, she was on her way to attend coaching classes, suddenly her 38-year old uncle, Riyaz Ahmed came and forced her into a car at knife-point. “He threatened me with dire consequences if I declined his proposal of marriage, when I did not give in to his demands he pulled me by my hair towards him and put a knife at my throat”. She said when she resisted his torment; he got furious and started pouring a liquid (acid) on her head. “Although, I tried to defend myself for the rest 15 minutes, my efforts went in vain. Gathering all my strength, I pushed him and jumped out of the car. My eyes were shut, despite that, I got into an auto rickshaw that was passing by”. She said she asked the auto-rickshaw driver to take her to a police station or hospital. The auto-driver took her to the nearby police station. From, there she was taken to the hospital. Her head, face and thighs were affected by the acid-attack. She also lost her hair on the right side of the head permanently. Despite passing all through this agony, she was talking with reporters with ease and smile on her face. When asked from where she got the courage and determination to fight her tormentor, she quipped, ‘from inner power’. “Even when I was in police station and then hospital, I did not cry for a moment while my parent and friends could not control their emotions. Even my doctors, who treated me, said that because of my courage and patience, I recuperated early,” she added.
Resham, who is resident of Transport Nagar locality in Lucknow and studying in a convent school, said she wants to join the civil services and become an IAS officer to bring change in the society. Covering her head with a scarf, the ebullient girl said her uncle, who was a distant cousin of her mother, had fallen in unrequited love with her and was 22-years older than her.
Out of 24 brave children, eight are girls and 16 boys while four of them have been given awards posthumously. The National Bravery Award Scheme was initiated by the ICCW to give due recognition to the children who distinguish themselves by performing outstanding deeds of bravery and meritorious service and to inspire other children to emulate their examples. It was first instituted in 1957 when two children, a boy and a girl, were first rewarded for their presence of mind and courage. It is to be mentioned that in 1987-88, ICCW instituted the Bharat Award for an exceptionally outstanding, meritorious and gallant deed.
In response to a question, Chairperson of the Committee Veena Seth told the Islamic Voice that the Committee follows a thorough criteria and procedure in selecting children for awards. However, she stressed the need of publicizing the scheme at grass-root level as this year only 1,000 applications came for selection. The awardees will receive a medal, certificate and cash and will be granted financial assistance until they complete their schooling. Since its inception, the ICCW has given awards to 895 brave children – 634 boys and 261 girls.