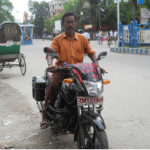 Name of Karimul Haque from Jalpaigudi of West Bengal also finds a place among the Padma Shree awardees this year.
Karimul Haque has been known here for operating a bike-ambulance service for the local residents to ensure that no one is deprived of timely medical assistance. And he does it for free. Karimul, as he is locally known, lost his mother as she could not be carried to hospital in time.
He was working in a tea estate and earned just about Rs. 4,000 a month but would never mind spending Rs. 2,000 for fuel and other expenses. He told TwoCircles.net : “I am doing this in memory of my mother so that God grants her a place in heaven,” he had said back then.
When the news channels broke the news about his being conferred Padma Shri award, he remarked: “I am overjoyed and thankful to Twocircles.net for the coverage they gave me,” When asked how his life would change now that he be the recipient of one of India’s civilian honours, he said, “I want nothing for myself. I still run the ambulance and can afford the petrol bills. Instead, I would be grateful if the government can do something to ensure better medical facilities in the region,” he added. (TwoCircles.net story rewritten)