Islamic Voice 0 May, 2018 12:00 am
The Islamic Golden Age of Science – The Ibn Al-Haytham Example
Unity in Tragedy
I am Sorry Convent of Jesus and Mary, For, I Have Failed You! 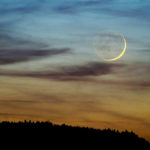 Scientifically, Ramadan’s new Moon should be visible on May 15.
The Muslim holy month of Ramadan will begin either on the eve of May 15 or May 16, depending on the sighting of the Moon. The first day of Ramadan is often observed on different days, contingent on the local visibility of the Moon.
In the United States and in Europe, Muslim communities rely on astronomical calculations and will thus observe Ramadan from the eve of May 15, with the first day for fasting being May 16.
While Saudi Arabia and most Arab countries are expected to sight the Moon on May 15, Morocco, Iran and Pakistan may see it on the following day because they started the current lunar month one day later.

Scientific Predictions
Astronomers calculate that Ramadan’s new Moon will be born on May 15 at 11:47 GMT, but its visibility on the first night may only be possible with specialised equipment.
Since 2017, Saudi Arabia and other Arab countries have used specialised infrared digital cameras that can photograph the new Moon, otherwise invisible to traditional telescopes due to their limited optical range.
If such equipment is used again this year, Saudi Arabia will likely observe the first day of Ramadan on May 16.
On the eve of May 16 however, the new Moon should be visible with the naked eye from across the world, making it most likely that countries, depending on local sighting of the Moon, will observe the first day of fasting on May 17.
Actual visibility of the crescent will depend on factors such as atmospheric conditions, cloudiness and the distance between the Sun and the Moon on the horizon.
Lunar Calendar
In order to declare the beginning of Ramadan, Saudi Arabia and other Muslim-majority countries depend on the testimonies of local Moon sighters. The Judicial High Court then makes a decision on when Ramadan begins. Saudi Arabia’s official Umm al-Qura calendar marks the first day of Ramadan as May 16, 2018.
By the Gregorian solar calendar, Ramadan comes 10 to 12 days earlier each year. Last year, the first day of Ramadan was on May 27, 2017.
(Extracted from aljazeera.com)