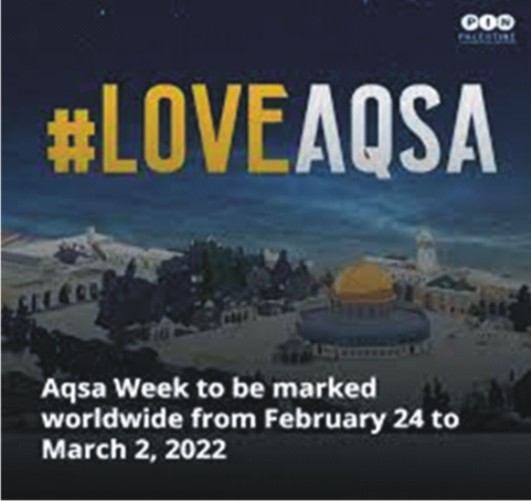 Aqsa Week was launched in 2017 to inform people of Al-Aqsa and its history and significance, and the dangers faced by the mosque and the Palestinian people. FOA organized a fortnight march to call on Londoners to boycott Israeli apartheid.

According to organizers, a UK-based initiative to shed light on the Al-Aqsa mosque in Jerusalem has gone global for the second year in a row, with more than 50 countries set to take part.
Aqsa Week 2022, which will run from February 24 to March 2, is being organized by the British-based Friends of Al-Aqsa (FOA) an NGO concerned with defending the human rights of Palestinians and protecting the Al-Aqsa Sanctuary.

FOA said that during the week, which they anticipate being the biggest one yet, mosques, universities, local councils, and parliaments would hold talks, workshops and other activities and educational events to highlight the mosque’s heritage and bring a global focus to its issues and the plight of the Palestinians.

“It is an incredible week for people around the world to create conversation and raise awareness on the centrality of Masjid Al-Aqsa as well as the plight of the Palestinian people,” FOA said.
Al-Aqsa is Islam’s third holiest site and is in close proximity to religious sites significant to Jews and Christians, making the area a flashpoint in the Palestinian-Israeli conflict. The Israeli government has on occasion prevented Muslim worshippers from accessing the mosque.

Several of the FAO events will be streamed live on their social media accounts and TV and radio, and they have chosen #LoveAqsa as this year’s hashtag.

“Aqsa Week 2021 was an unprecedented global success, receiving incredible support from government departments and prominent institutions, including the Departments of Religious Affairs in Turkey and Malaysia, the Iraqi government, and the Palestinian Awqaf,” FOA said.

“FOA called on individuals and businesses to stop buying Coca-Cola until the company ends its complicity in the human rights abuse of Palestinians,” it said, as part of its #NotInMyFridge campaign, which says the company operates in an illegal Israeli settlement, making it complicit in apartheid.