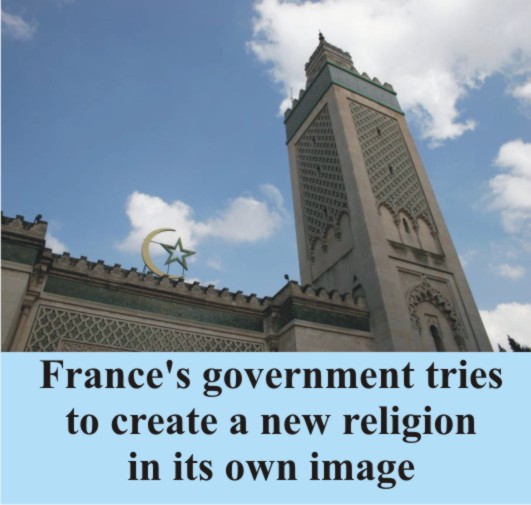 Inventing a French version of Islam?

After numerous horrifying attacks in recent years, the French government seems to acknowledge that atrocities and terrorism can be driven by religious beliefs and in fulfillment of theological commitments by self-identified Muslims.

France now seeks to reform Islam by government action. The Associated Press reports that the plan is to form a “new body” of Muslims named The Forum of Islam, which will work closely with the government “to reshape Islam in France and rid it of extremism.” All the members of this forum “will be hand-picked by the government, and women will make up at least a quarter of them.”
This forum is labeled “new” because France has been trying in vain for years to deal with Islamic extremism. Since he took office, French President Emmanuel Macron has repeatedly called for a French version of Islam. More than once, he insisted, “The influence of Islamism must be eradicated from public institutions.”

But nothing has really changed, and extremism under the umbrella of Islam continues to terrify the French people.

Some claim that Macron is making a political move to please conservatives and right-wingers to secure his reelection later this year, but this seems simplistic, as people across the political spectrum see a problem of Islamic extremism in France.

The Islamic masses are not likely to be impressed by the French government’s official version of a new Islam that is completely compatible with modern secular values.

The idea of Islam for France reflects another desperate attempt by the French nation to deal with its Muslim community—the largest outside the Islamic world. The plan demonstrates that the secular government has finally been forced to acknowledge the significant role Islam plays in the life of many of its citizens. But can a government reshape or reform Islam? Should it try? Is this government’s role?

While we can all hope for successful efforts to see militant Islam substantively weakened, we should be skeptical that governments can reform ideologies. A government can redesign rhetoric about Islam and reshape Islamic interpretations by relying on liberal and progressive Muslims, but politicians can hardly achieve the reformation of Islam. Furthermore, the Islamic masses are not likely to be impressed by the French government’s official version of a new Islam that is completely compatible with modern secular values.

More fundamentally, we should be skeptical because the failure of France’s various attempts to deal with Islamic extremism shows its inability to understand a distinctive Islamic worldview. While many French Muslims would arguably criticize and condemn attacks against non-Muslims, we should think carefully about the Muslim enthusiasts who carry out terrorist attacks. Muslim zealots are driven by a uniquely theological worldview.

In this worldview, France and the entire non-Muslim West for that matter—is the realm of Satan. For these Muslims, anything French is un-Islamic, and French values are evil. The French government is non-Muslim and thus an enemy.

In a sense, these Muslims live in France, but France does not live in them. Their hearts long for the day when France will be an Islamic state, completely subjugated to Islam’s hegemony. For these religious zealots, the act of assimilation and integration in French society is to be despised and viewed as joining the camp of the unbelievers. This is a distinctive Islamic worldview.
Can they now create a French Islam? Sure, they can but on paper only. Real life operates by different rules, and worldviews do matter.

(Source: https://wng.org/ opinions/inventing-a-french-version-of-islam)
(The writer is a professor of Islamic studies and director of the Jenkins Center for the Christian Understanding of Islam at the Southern Baptist Theological Seminary.. He authored several books)