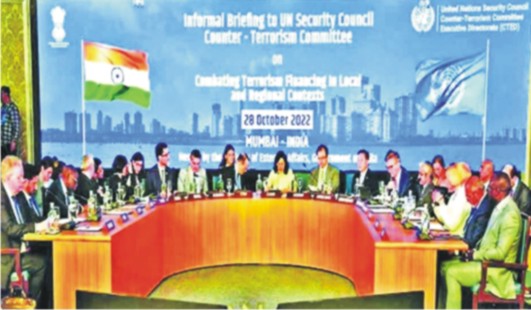 The tenets of Sufism can go a long way in dealing with the menace of terrorism. Its universal appeal has the potential to heal and rejuvenate.

Terrorism still continues to be one of the most serious challenges confronting mankind. India has been hit hard the most, particularly by cross-border terrorism. It has already declared zero tolerance against it and vowed to eliminate it. During the last over five years, India has made persistent efforts in the United Nations and outside of it to ensure united action against the scourge. The efforts have started to yield results. The counter-terrorism committee of the United Nations Security Council in its special meeting held in India on the 28th and 29th of October unanimously urged all member states of the UN to ensure zero tolerance against terrorist activities and vowed to deal with menace more vigorously. In its declaration, the Committee reaffirmed that terrorism in all its forms constituted one of the most serious threats to international peace and security. It also urged all member states to deny access to terrorists to safe havens and bring to justice all persons supporting or planning terrorist attacks. The special meeting declared that terror financing is an important aspect of combating terrorism, and it should be effectively curbed.

Apart from Naxalite and similar forms of terrorism which arise mostly from economic causes, terrorism confronting the whole world springs mostly from radicalization and extremism attributed to Islamic ideologies. ` Ulemas could be catalysts in changing the radicalized mindset of those involved in fomenting terrorism through wrong interpretation of ideology. Unlike many other religions, they cannot question the revelations made in the holy Quran even though these are wrongly interpreted. Consequently, Islamic extremism and terrorism have become a world problem. No alternative has come up so far which could rid the Islamic world of its ills and enable it on its own to live, adjust and co-exist with the rest of the world.

During the thirties of the last century Mustapha Kemal popularly known as Ataturk, father of the Turkish nation, appeared to have found a way out. His liberal and progressive interpretation of Islam opened doors for Turkey to become a full-fledged member of the comity of European nations. His views and actions were acclaimed but these did not last long. Now for over three decades, Turkey has been going back. Later during the present century hopes were rekindled by democratic elections in Tunisia in 2011 followed by elections in some other Muslim countries. The development was termed as `Arab Spring` but it too failed to bring about a renaissance. It only indicated that the Islamic world is not yet ready or prepared for a change on progressive or liberal lines based on true meaning of Islam. Sufis being far fewer in number have not been able to influence much of the rest of the population with their liberal outlook. Of late some Muslim countries have started to adopt liberal attitudes, particularly towards social and cultural issues on their own.

There has been a growing realization that apart from actions against terrorism at the governmental level, the civil society too must play a vital role in the elimination of scourges like terrorism. Hope was created when a dialogue was held in New Delhi late last month between Indonesian and Indian delegations of Ulema and leaders of other faiths in which it was made clear that Ulemas have a vital role to play to counter radicalization and extremism by propagating progressive ideas and thought. In his opening speech at the dialogue, National Security Advisor Ajit Doval said that we should focus on the real message of our religions which call for humanism, peace, and understanding. He observed that fissures appeared among the Caliphs after the death of the Prophet on the question of legitimate heir with each faction attempting to outdo the other by exposing a more radical interpretation of Hadis. It is here that the Ulemas have a leading role to play in educating the people about the original tolerant and moderate principles of Islam, he said. He pointed out that the holy Quran itself teaches that killing one person is like killing all humanity and saving one is akin to saving humanity and said that Islam ordains `Jihad Afzal` that is Jihad against one’s senses and ego. Mohammed Mahfud Coordinating Minister for political, legal, and security affairs of Indonesia in his keynote address at the event said that such discussions give us the opportunity to learn from each other. Many a time we witness people who use their religion as a doctrine of absolute truth and readily blame others. We must go out of this and improve. Religion, he added, should be a source of peace not the reason for discord, conflict, or violence. It should be a unifying tool, not a divisive instrument, he remarked.

(The writer is a journalist, former IIS officer and producer. The views expressed are personal. Source: https://www.dailypioneer.com/2022/)