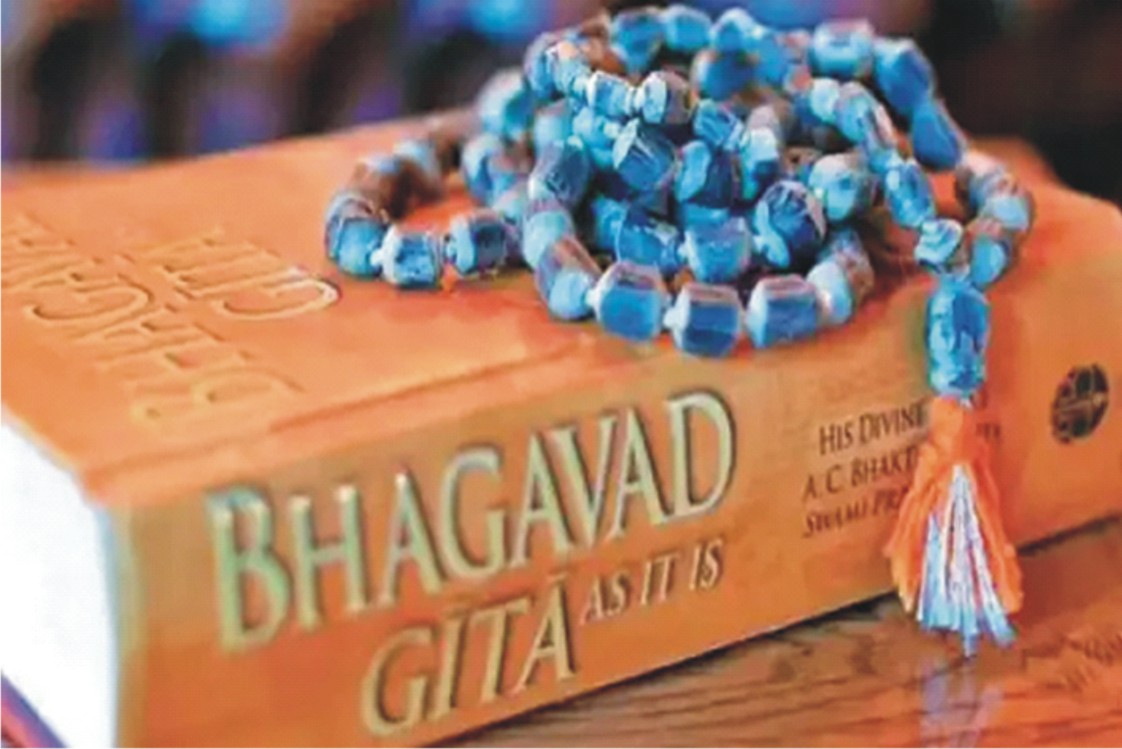 Right wing organizations have a long history of attempting to distort history and saffronise education. Such endeavours have become a clear and state-sponsored agenda since its political arm came to power. Gujarat is the most recent example, where school education is in shambles, with 18,000 teacher positions unfilled and 6,000 schools closed. Gujarat Education Minister Jitu Vaghani declared in the state assembly on March 17 that the Bhagavad Gita will be included in the school curriculum for classes 6 to 12 across the state beginning in the academic year 2022-23, in apparent violation of the Indian Constitution.

Another BJP-ruled state, Karnataka, has declared the inclusion of Vedic scriptures in the school curriculum, following Gujarat’s lead. With Hijab bans in schools and other Islamophobic policies, the state generates headlines for all the wrong reasons.

Earlier, during the winter session of Parliament, Union Education Minister Dharmendra Pradhan told the House that the Bhagavad Gita had been incorporated into curriculums at all levels of the Indian educational system, from school and college curricula to technical education.

He responded to a written question in the Lok Sabha about Hindu scripture being included in school and college curricula.

“Materials relevant to the ‘Shrimad Bhagwat Gita’ (sic) are already present in its Class 11 and 12 Sanskrit textbooks,” the minister stated.

“The NCERT history textbook for Class 6, ‘Our Pasts-I,’ has a reference to Shrimad Bhagwat Gita under the theme ‘Traders, Kings, and Pilgrims,'” Pradhan said.

The University Grants Commission (UGC) has included portions of the scripture in the National Eligibility Test (NET) exam for the ‘yoga’ topic, a qualification exam for university instructors in India.

Higher education institutions have already hopped on the bandwagon of alternate histories, pseudoscience, and other Hindutva aims by organizing similar events, even before the federal minister’s announcement. Sri Ravisankar recently spoke at IIT Kharagpur about reducing stress among students. The yogis and babas have become a frequent fixture at a number of higher education institutions where meaningful discussions with a scientific slant and a secular mentality are required. The proposed NEP also focuses on “India-centric” education cloaked in Hindutva ideology.

However, the Gujarat government’s decision could be followed by other BJP-ruled states.

The move is a frontal attack on the Constitution’s secular underpinnings.

“We appreciate the decision to include Shrimad Bhagavad Gita in the syllabus,” said Gujarat Congress spokesperson Hemang Raval. But he highlighted the abysmal state of education in Gujarat. “Only 14 schools out of 33,000 are A-plus grade schools. There are 18,000 vacancies for instructors, and 6,000 schools have closed.”

Gujarat has the highest number of school dropouts, and many students do not even know how to read and write till Class 8. Hopefully, the government will do something for them, Raval added.

Gujarat is regarded as the “first Hindustan laboratory,” according to Dev Desai, an Ahmedabad-based activist. He told Islamic Voice that incorporating a specific religious scripture into school curricula directly attacks the Constitution and its secular foundation. We must fight such attempts to poison innocent minds, and the new educational policy appears to be more concerned with saffronisation than with enhancing the country’s educational standards. Desai explained.

Desai alleged that the BJP state government in Gujarat is further communalizing school education, which could have serious ramifications for students, rather than filling vacancies, enlarging classrooms, providing basic facilities on campus, and opening new schools.

“A Hindu Rashtra is the stated objective of the RSS’s formation more than nine decades ago, a goal spelled out in great detail by V D Savarkar in writing,” remarked famous journalist and Secretary-General of the All India Christian Council, John Dayal. Despite being a devout Hindu, Mahatma Gandhi paid the price for agreeing to partition and then refusing to make India exclusively Hindu.”

He told Islamic Voice that the saffronisation of institutions is being tried at full speed. Still, the RSS cannot be certain that it will be able to find new cadres in every state with its own ethnic diversity without radically changing the human resource, which can only be done by a massive, well-planned education of future generations.

As a result, the saffronization push is required to mould the next generation along the saffron lines.

The British had brought modern education and had also encouraged social reforms, including an end to Sati, for instance.

Dayal said, “The BJP RSS programme takes a lesson from what it derides as Macaulayism, and then uses it to reverse the trend, to recreate a religious, cultural series of generations that will be rooted in the old Hindu Rashtra vision.

He said that attacking the NEP is a means of achieving the Hindu Rashtra goal.

“The new education policy is a means towards this end. We have exposed this systematically since it was first shown as a draft. Every passing day adds to our fears that education from primary to college levels is being moderated and guided towards a situation which will reverse all the progress made in rational thinking and scientific temper by Jawaharlal Nehru.”

He further underscored that “Violence against minorities has been tried many times in the last seven decades, but for several reasons, including the federal nature of the country, it is not possible either to wipe away the religious minorities or to so frighten them that they will accept second class citizenship in India, even including disenfranchisement, meekly. Even by democratic Hindu society, the resistance to the CAA proved that amply in this decade”.

However, another Christian leader and former member of the Delhi Minorities Commission, A.C Michael, did not see any wrong in the introduction of Vedic text education. Speaking with Islamic Voice, Michael said it’s a good idea as Minority educational institutions owned by Christians, Sikhs, Jains, Muslims, and other communities currently teach their students respective religious books

“I think it’s a good idea. Minority educational institutions run by Christians, Sikhs, Jains, Muslims, and other communities are already teaching their students respective religious books. This will strengthen our country’s secular and democratic fabric as every religion teaches equality. Maybe options could be given to each student to choose their preference of religious book to learn irrespective of one’s family or individual faith.”

“School is a temple of learning, not a temple to spread the ideology of a certain religion, ” said Maulana Qari Ishaq Gora, patron of Jamiat Dawat-ul Muslameen, a Deoband-based social organization.

He further stated that “The Karnataka high court, in its recent observation on the issue of ‘hijab,’ had said that the ‘school will run by uniform and not by any religious practice.’ So, if we go by the court, is it appropriate to include ‘Gita’ in the school curriculum?”

Maulana Ishaq said that the government must first obtain the students’ consent and teach “only those who are willing.”

“However, I believe that imposing a religion or its holy writings on anyone is inappropriate,” he remarked.

Echoing similar sentiments, Mufti Asad Qasmi, another Islamic scholar from Deoband, said it would be “wrong to impose anything on young minds.”

“We are not against the teachings of ‘Gita’ in school, and the children who want to study ‘the holy book’ can, but to impose it on Muslim students is wrong as students from all faiths study in schools, said the Mufti.