Depositors will lose nearly a third of their money if the Canara Bank takes over the Amanath Bank. 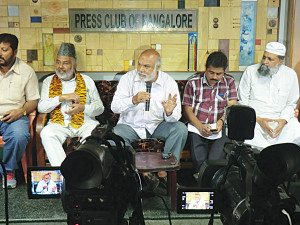 Bangalore: Pressure is being mounted by depositors and well-wishers of Amanath Bank against its takeover by Canara Bank which has notified that it would deduct 32% of the depositors money in the event of takeover materialising. This is besides the takeover of the entire assets of the Bank whose value runs into crores. Currently money deposited by several mosques managing committees, wakf institutions and orphanages is locked up in deposits with Amanath Bank which is under instructions from the Reserve Bank of India not to allow depositors to withdraw amount exceeding Rs. 1,000 in six months.
Prosecute Rahman Khan
In a press conference on September 18, office bearers of the Amanath Bank Share-holders and Depositors Protection Committee demanded that the Bank’s former President K. Rahman Khan, other directors and defaulters be prosecuted for alleged misappropriation of funds of the bank and new directors be inducted for generating resources and the control of the bank be restored to persons of integrity within the community. It indicated that resourceful people from the community have come forward to pump in some money and fulfil the RBI’s conditions to allow the Bank to get back to normal transactions. The Committee President Syed Rahmathulla alleged that the present management headed by Mr. Naseer Ahmed”a Congress MLC and a relative of Mr. Rahman Khan”instead of filing criminal cases for the recovery of fraudulently siphoned off amount, is seeking merger of the Bank with Canara Bank. Mr. Rahmathulla said that if the takeover or merger was allowed the Canara Bank would deduct funds of several religious organizations which were already under financial stress. It cited the case of the 120-year old Muslim Orphanage which had huge amount deposited in Amanath Bank which at no cost be allowed to be punished for merger of a bank plundered by the Muslim bigwigs of the community in Bangalore. “Should the orphanage inmates be punished for the crimes committed by the rich and the powerful”, he questioned.
According to Mr. Rahmathulla, as of now the Bank’s position was sound and a takeover could well be averted. He said the Bank has Rs. 300 crores in liquid fund, gold convertible into Rs. 35 crores in deposits against loans and a further Rs. 165 crores of secured loans. He said some resourceful persons within the community were willing to pump in Rs. 35 crores to fulfill the RBI’s moratorium on the Bank’s functioning but wouldn’t do so unless they were taken in as directors first. “But the present management was insisting deposits prior to nominating them directors, something not agreeable to the management”, he commented.

Bank can Still be revived
The Committee referred to the reasons given by the RBI for placing moratorium, i.e., sanctioning of loans while Mr. K. Rahman Khan was the President of the Bank, to the tune of Rs. 63 crore. The amount of the defaulted loans has now gone up to Rs. 102 crores by gathering interest. Secondly, it pointed out, Mr. Khan’s successor, Mr. Ziaulla Sheriff waived off Rs. 30 crores from the outstanding loan (principal + interest) amount during his tenure against the norms of the banking regulations.

Govt Protecting the Defaulting Directors
They said the Government of Karnataka attached the personal properties of the above stated persons but they were able to secure stay from the higher courts in order to remain in possession of the property. He told news persons that the RBI in its letter dated June 24 UBD(BL)N04732/09-01-001/2013-14 this year has asked the Government to file criminal cases against ex president, ex directors and the official who connived with them in issue of loans. But the current Congress government was protecting the defaulters, they asserted.

Standoff
Meanwhile, current President, Mr. Naseer Ahmed who in a meeting with several NGOs belonging to the community in the first week of September, promised to induct new members into the board of directors on the promise of committing some funds necessary to bale out the Amanath Bank, had changed the tune around the end of the month insisting on commitment of funds prior to induction. As we go to the press around September 25, the standoff continues and it appears as if Mr. Naseer is under tremendous pressure not to allow the revival or restoration of Bank to the community’s control.
The press conference was also address by Mr. Sardar Ahmed Quershi, President, Tippu Sultan United Front; B. L. Shankar, President, Dalit Sangharsh Samiti; Syed Md. Iqbal of the Muslim Muttahida Mahaz and Mr. K. L. Ashok, secretary, Komu Souharda Vedike.