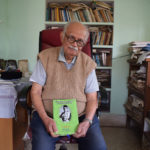 Mysuru: “Sir Mirza M. Ismail: A Great Administrator”, a biography of late Mysore Dewan Sir Mirza Ismail is the latest of the books penned by Prof. B. Sheik Ali, former vice chancellor of Mangalore and Goa Universities. The biography spread over 322 pages compiles the accounts of life and achievement of Sir Mirza Ismail who held the dewanship of the princely state of Mysore from 1926 to 1941 under the reign of Maharaja Nalvadi Krishnaraja Wodeyer. It has been published by Darul Umoor Research Centre at Srirngapatna. The book was released by Mr. Ziaulla Sheriff, Chairman, India Builders.
Speaking to Islamic Voice at Mysore, Prof. Sheik Ali said he had extensively quoted from speeches of Sir Mirza Ismail. He said Mirza Ismail was a close associate and confidant of Maharaja Krishnaraja Wodeyer and pioneered several industrial projects in the former Mysore state. He said much of the reference work was available with the Mysore University library and archives. “Mirza Ismail was instrumental in setting up manufacturing units for steel, cement, sugar, paper, chemicals and fertilizers, aircraft, glass, porcelain, agricultural implements, spun silk, electric bulbs and cast iron pipes besides coffee curing works and hydroelectric stations that became the bulwark for further industrialization of the Mysore state”.
Quoting the legendary dewan, Prof. Sheik Ali said Mirza Ismail’s following words still ring into his ear that he had spoken in a speech on All India Radio on August 5, 1938: “We are very proud of the products of these factories and at the risk of being called parochial, try to set before all true Mysoreans the idea that they should wash themselves with Mysore soap, dry themselves with Mysore towels, eat the abundant Mysore food, drink Mysore coffee with Mysore Sugar, equip their houses with Mysore furniture, light them with Mysore lamps and write their letters on Mysore paper”.
The book traces the long journey of Mirza Ismail as a classmate of Krishnaraja Wodeyar in the Maharaja’s special class under the tutorship of S. M. Fraser at Mysore between 1896 and 1902 which brought him closer to the sovereign being groomed to preside over the state to his 15-year dewanship. As India was under the throes of Independence struggle, the period was marked by political tumult with national, communal and colonial interests constantly in conflict. After resigning from the dewanship of Mysore, Mirza Ismail was appointed the Dewan of Jaipur State and briefly held the same position at Hyderabad under Nizams for less than a year. Mirza Ismail was a staunch nationalist and did not want India to be divided on communal lines. Despite not being on good terms with agitating Congressmen locally, Mirza had maintained cordial relations with leading figures of Congress and nationalist struggles. He looked at Sir M. Visveswaraya, the former Dewan of Mysore as his mentor.
The book is priced at Rs. 400 and is available at Knowledge Society Publications, No. 59, 7th Main, 3rd cross, Saraswathipuram, Mysuru-570009, Ph: 0821-2543439.