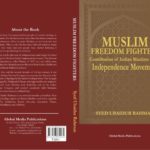 Patna: Two books on Muslims’ contribution to India’s Freedom movement were launched in Patna on December 17, 2017. The function was presided over by Harsh Mandar, former IAS officer and human rights activist. The books, ‘Muslim Freedom Fighters: Contribution of Indian Muslims in the Independence Movement’ and its Urdu version ‘Muslim Mujahideen-e-Azadi aur Tehrik-e-Azadi Mein Unki Khidmat’ have been authored by Delhi based author and journalist, Syed Ubaidur Rahman. The two books counter the oft-repeated allegations that Muslims are anti-national and have not contributed for the freedom of the nation. The books nail the lie and prove that Muslims not only participated in the freedom movement, they went on to lead the freedom struggle for a long time. The first war of Independence or Mutiny of 1857 was led by Mughal emperor Bahadur Shah Zafar in Delhi and Begum Hazrat Mahal in Lucknow. The Independence Movement in the first two decades of the 20th century was led by Mahmud Hasan and ulama of Deoband. Khursheed Mallick, a Chicago based urologist, philanthropist and director of IMEFNA said that the book is a timely reminder to the nation that Muslims and Hindus both sacrificed for the nation and this fact must be clearly told to our young generation. The book documents the lives of forty renowned Muslim freedom fighters. (For more details, contact : Global Media Publications, E-42, G. Floor, AFE, Jamia nagar, Okhla, New Delhi-110025. e-mail: [email protected])