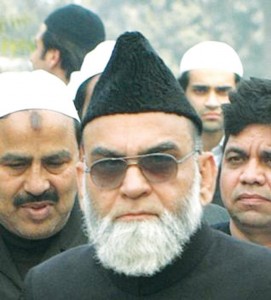 New Delhi: Ahead of every general elections, it has become a fashion for Delhi-based ‘inconsequential’ Muslim leaders and organizations to hold meetings apparently for chalking out an election strategy for Muslims but the real purpose behind such meets are to further their bargaining capacity with major political parties. Shahi Jama Masjid’s Imam Syed Ahmed Bukhari is known for convening such political jamborees on the eve of elections. In this connection, he convened a “Representative Meeting of Muslim Leaders” on February 22 at the Jama Masjid complex here, but the meeting turned into a slanging match between pro- and anti-Samajwadi Muslim leaders on the question of extending support to the BSP. However, sensing the mood of the gathering, the organizers did not announce their support for the BSP, but the tone and tenor of the whole day proceedings clearly indicated that they wanted to teach a lesson to the Samajwadi Party in the ensuing parliamentary elections. It announced about forming a 11-member committee to look into the matter that will suggest future course of action.
Sulking after his son-in law was reportedly denied a birth in the Uttar Pradesh cabinet, he is not missing any opportunity to attack Samajwadi Party and its leader Mulayam Singh Yadav. In his keynote address, he also focused more on SP Government in UP than on other political parties. He alleged that the SP government had become a stooge in the hands of the communal forces and ignored the minority problems to please them. He even praised the BSP saying during the rule of Chief Minister Mayawati, Muslims were at least safe and secure in Uttar Pradesh. However, all hell broke loose, when Muslim Majlis leader Badar Kazmi suggested that Muslims should extend their whole- hearted support to Bahujan Samaj (BSP) as many leaders rushed to the podium condemning his views, and demanding that the meeting should not declare support for any party at this moment. Sensing that the situation is going out of control, Imam Bukhari intervened. While trying to calm down rising tempers, he exhorted that everyone has the right to express his views.
It may be recalled that the Imam had sent a missive to Mulayam Singh Yadav seeking his reply on the party’s eight key promises made to Muslims before the Assembly elections in 2012, but he ignored the letter.
In his address, Imam Bukhari made a special mention of the West Bengal Chief Minister Mamta Banerjee. He said the Trinamool Congress leader Mamata Banerjee had visited the Jama Masjid and briefed about the actions taken by her Government for the welfare of the Muslims in her State. Ahead of the meeting, Imam Bukhari wrote a letter to State Governments seeking their reply on the implementation of the Sachar recommendations but only West Bengal government sent its reply in this regard.
In the press conference held after the meeting, Imam Bukhari blamed Mulayam Singh for not fulfilling any promises made to the community on the eve of Assembly election in Uttar Pradesh. “More than a hundred communal riots had taken place in the State and the Akhlesh Yadav Government had failed on all fronts and Mulayam Singh is hobnobbing with communal forces,” he added. When this correspondent questioned why you are only focusing on Uttar Pradesh as UP is not India and India is not UP, he quipped that UP matters the most in the elections as it the largest state of the country and Muslims can play a decisive role in stopping the communal forces from coming to power.
He also lashed out against the Congress Party and other ‘secular’ parties adding that they are responsible for the backwardness of the community. Exhorting Muslims to become political force of their own, he said the Central and State Governments were not sincere in addressing any issues of the community.
Muslim delegates, who came mostly from UP urged the Government to implement recommendations made by the Sachar Committee and Justice Rangnath Commission. Expressing grave concern over the harassment and arrest of innocent Muslim youths in name of fighting terror, the meeting demanded that the Government should bring out a white paper in this regard and take appropriate and stern measures for providing security and safety to the Muslim community from the recurrence of communal violence.
Though the meeting was dubbed as “representative meeting of the Muslims” but absence of notable faces of Muslim leadership and organizations were palpable in the meeting. Imam Bukhari announced that 11- member committee will look into the manifestos of secular parties and their implementation. On the basis of this, it will prepare a report and will suggest to whom Muslims have to support in the coming elections. He will issue an appeal on behalf of the committee to the community. However, one leader, on the condition of anonymity who participated in the deliberations, said the whole exercise was meant to enhance the bargaing capacity of Imam Bukhari as he used to organize Muslim representative meetings at the time of elections. He further said in all likelihood he (Bukhari) will announce support to the Bahujana Samaj Party in UP as he was extremely annoyed over denial of a cabinet berth to his son-in law by Mulayam Singh. Looking at his posturing, he may announce support for the BSP in the coming Parliamentary election. Imam’s antics must be watched in this background.