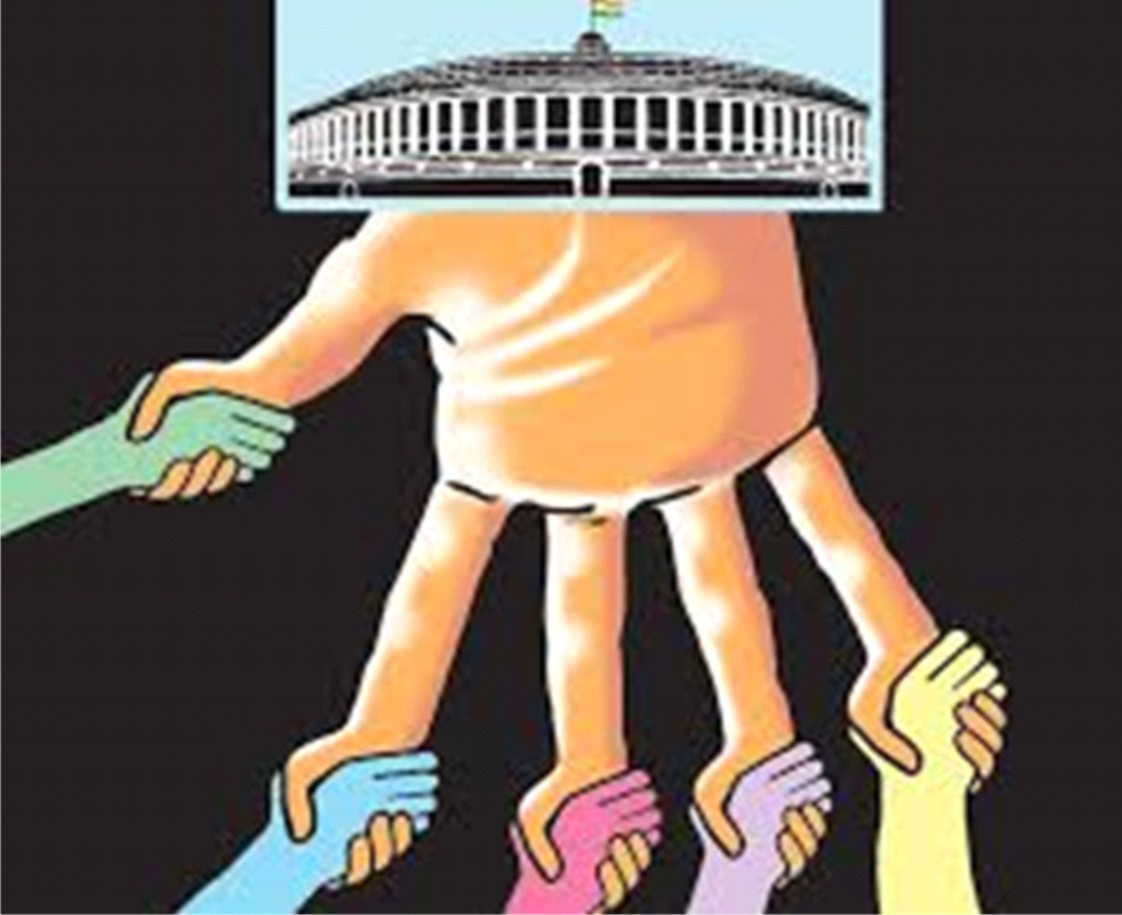 Can India, a Hindu Nation, find a solution to the Hindu Muslim Conflict?

Main Points:
1-Since India is not yet a declared Hindu Rashtra, there is still an illusion of secular democracy, which will disappear by declaring it a Hindu state.
2-India’s becoming a Hindu state does not solve any problem of minority and majority conflict.
3-For Secularism, to be successful, we need to secularize our society first.

London-based veteran Journalist and author Hasan Suroor in his recent book “Unmasking Indian Secularism: Why We Need a New Hindu-Muslim Deal,” argued for a Hindu Rashtra or being India declared a Hindu state.

He says that Secularism in India has been proven a mirage and unhelpful to minorities. It does not simply fit a nation deeply rooted in religious rituals. Now with reaching Hindutva people to the highest echelons of power, India virtually has become a Hindu Rashtra; you may concede this or not, but it simply does not matter. He also feels that the majority of Hindus have real or imaginary grievances and comprehensions towards Muslims, which should be addressed, and a new deal between Hindu-Muslim communities must be on the table. This proposed deal, in his opinion, maybe that India should be declared a Hindu state under which all minorities and Muslims in particular, should seek equal citizenship rights. He claims that just because it is called a Hindu state does not necessarily mean that it will be a Hindu theocracy. Theocracy does not function practically in today’s world; thus its institutions will defend secular values in their dealings and executions; hence, it will function practically as an undeclared secular state. Suroor believes that England is the best example of a country where Christianity is the official religion but where the political system is fundamentally secular. The vigilante brigade regularly insults, beats, and massacres Muslims in the name of cow protection. Many BJP politicians and even some Hindu Dharam grues have been making inflammatory statements as well. vows to exterminate Muslims, threats to deport them to Pakistan or graveyards, and everyday harsh media bombardment against Muslims. These are the issues Muslims deal with on a daily basis. According to Suroor, Hindus should be given a Hindu Rashtra or whatever makes the hurt Hindu mind happy.

I think Suroor is here confusing some facts.
1-The million Dollar question is that India is still nominally a secular country. When it becomes fully declared non-secular non democratic, will the dangers pointed out above increase or decrease? Today the print media is still keeping some illusion of Secularism alive. Even in the administration, everything has not been corrupted yet. When Secularism will no longer exists, then where will minorities go to stop these atrocities?
2-Secondly, suppose India one day ceases to be a secular state. In such a case, it will immediately be taken over by hard-core dominating Hindutva people who will dismiss its secular character and impose the Hindu code of life, as well as the “Verna Ashram” system, a caste-based conception of society, and disenfranchise Muslims. The claim that religious theocracy cannot work in this era is also a fallacy because we see that theocracy is running smoothly in many countries. Saudi Arabia for example is a purely theoretically declared monarchy. Its nature, values, and constitution all are anachronistic, yet because it has enormous oil resources, it not only survived but thrived for a century or so on its petrodollars. Likewise, a Hindu theocratic India will also be tolerable to the world because of its colossal market.
3- There is a considerable difference between Indian and British societies. Britain may be a declared Christian, yet the society is deeply secular. Secular values, individual freedom, human dignity, equal citizenship, equality before the law, etc, are so embedded there that any Western society, the British one of them, cannot imagine a life without these values. But Indian society is totally different. It is obsessed with religious rituals so profoundly that, irrespective that they are false or real; no life is possible here without religious rites. That is to say; you cannot contrast the societies that locate themselves at two so different poles.
4-If Muslims have to make a hard choice, as Hasan Suroor suggested, then why not choose the way of resilience and resistance? There are still some true liberal voices and upholders of democratic values among Hindus, best exemplify in JNU, and JMI students et al, who resist the oppressive regime, so why not assist them and strengthen the weakening liberal forces? Stand with them and for them and thus buttress these voices. Likewise, some brave media men still bravely question the government and its hard-line moves against minorities.
5-Because a country ruled by theocracy India, in our case, cannot do justice to its minorities, as seen in the unannounced theocratic Islamic Republic of Pakistan and the theocratic Islamic Republic of Iran. The failure of Secularism in India is because the state had adopted this functional polity for sound political reasons only. However, Indian society remained still unsecular to the core. The state did not take sufficient steps to secularize the society. It rather did so far, all kinds of Hinduization acts in the country. The surge in the Hindutva movement is the outcome of the so-called secular state’s unsecular moves, dualism, and hypocrisy and not the failure of Secularism per se.

In western countries, Secularism is triumphant because the societies are deeply secularized. So, in South Asia or elsewhere for secular democracy to be successful, it is a pre-requisite that the respective societies should be secularized first. In the case of India, our forefathers and makers of new India were aware of this fact, Jawaher Lal Nehru in particular. So, when a ceremony of rehabilitation and revival of the famous Somnath temple, once destroyed by Mahmood of Ghazni, was being held there. And the president of India, Rajendra Prasad, was invited to participate in the ceremony. Prime minister Nehru advised him not to go since he was a public representative. It is against the ethos of secular democracy to participate in religious ceremonies. But Prasad ignored his advice and participated in the ceremony with fanfare. In anguish, Nehru cannot help but quip: ” It seems that I am the only secular in this country.”

Muslim clergy and political leadership are also to be blamed. For they have been habitual in invoking Secularism when they are in danger and their religious and cultural identity is being threatened. Otherwise, they do not care much for this “damned ungodly thing “called Secularism!

What strategy Muslims should adopt in this country, and how they will be in toning with the mainstream of the country, sustain their religious and cultural identity, and go hand in
hand with other fellow citizens is a debatable issue.

That is why they are waging a holy war against secular polity in Muslim countries, not differentiating between Secularism in the Western context and Secularism in the Eastern context. Yes, some traditional Ulama like Moulana Husain Ahmad Madni and modernist Abulkalam Azad and Deobandi Ulama in general, except a few, were dynamic in their political view regarding Indian Secularism. Their stand is remarkable and appreciable. As Ali Miyan Nadwi commended their wise role, saying:

“Our Ulama’s legacy in the freedom movement is very bright and it seems that our leadership was inspired with the wisdom that secular democracy will be the best option for this country in the given situation.( Khutbate Ali Mian Nadwi)

Many Ulama accepted secular democracy; however, they also strongly opposed making Muslim society secular. I should be clear here that when I use the term “secularism,” I mean a secular political system that must treat every citizen equally and without bias or prejudice. And not in the sense that it was thought to be in the West as an anti-religious idea. As a result, a great kind of disorientation and duality has been created in Muslim society. Most Muslims are suffering from an abnormal religiosity that becomes an obsession with a slight provoking incitement, as seen in incidents like the Odepur killing or the Amarwati murder.

I think Muslims have to do great exertion by adopting a two-pronged strategy. On the one hand, maintaining their religious and cultural identity, they should relate themselves with the mainstream of the country and give up their separating and ghettoized mentality on the other.

Anyway, what strategy Muslims should adopt in this country, and how they will be in toning with the mainstream of the country, sustain their religious and cultural identity, and go hand in hand with other fellow citizens is a debatable issue. Readers are welcome to give feedback, ponder upon the suggestion rendered by Hasan Suroor in his book, and come out with other options exploring relevant points to the debate.

(The author is a Research Associate with the Centre for Promotion of Educational and Cultural Advancement of Muslims of India, AMU Aligarh.)